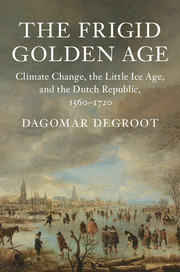 Dagomar Degroot offers the first detailed analysis of how a society thrived amid the Little Ice Age, a period of climatic cooling that reached its chilliest point between the sixteenth and eighteenth centuries. The precocious economy, unusual environment, and dynamic intellectual culture of the Dutch Republic in its seventeenth-century Golden Age allowed it to thrive as neighboring societies unraveled in the face of extremes in temperature and precipitation. By tracing the occasionally counterintuitive manifestations of climate change from global to local scales, Degroot finds that the Little Ice Age presented not only challenges for Dutch citizens but also opportunities that they aggressively exploited in conducting commerce, waging war, and creating culture. The overall success of their Republic in coping with climate change offers lessons that we would be wise to heed today, as we confront the growing crisis of global warming.

‘Degroot offers surprising insights into links between weather variations during the chilliest phase of the Little Ice Age and the Dutch Golden Age by exploring how merchants, soldiers and investors exploited new opportunities resulting from to climate change. The book is well-researched and exciting to read.'

‘In The Frigid Golden Age Dagomar Degroot, a leading climate historian, presents a highly original perspective on an unusually cold era when Europe was immersed in a series of devastating wars on land and the Dutch were becoming the greatest maritime capitalist power from the Atlantic to the East Indies. In compelling prose, he expands our understanding of how climate cycles, economic and political rivalries, and environmental history interact.'

‘Dagomar Degroot has written a powerful addition to the emerging literature on the wider human impacts of the Little Ice Age, in a book that will have a major impact on the field. His argument that the Dutch of the Golden Age responded creatively and successfully to the challenge of cold climate will have an important place in our evolved discussion of climate change in the twenty-first century.'

'While most historians have focused on correlating early modern climate cooling with unrest, crisis, and decline across the Northern Hemisphere, The Frigid Golden Age offers a more sanguine appraisal of an aggressively commercial, modernizing nation’s adaptation to climate change, albeit at the expense of some of its own citizens and untold others. … As a historian engaged in ongoing collaboration with historical climatologists, Degroot is skillful in his interpretation of state-of-the-art climate science, some of which is presented in statistical graphs, charts, and time series that integrate documentary sources with studies of instrumental and proxy data relevant to the history of the Netherlands.'

'The Frigid Golden Age demonstrates that climate should play a larger role in Golden Age historiography, and the book’s interdisciplinary approach, its clear and careful methodology, and diverse use of sources establish an effective approach.'

'The Frigid Golden Age is essential reading for anyone interested in pursuing research in the field of climate history.'

'Degroot has uncovered a fascinating element of climate history, and it is a testament to his archival prowess that he has found this treasure trove of observations from a variety of sources, and that these sources were probably not all sitting in the same archive, much less in a folder labeled 'Weather'.'

'In his book, Dagomar Degroot makes a strong argument for bringing the humanities and the natural sciences closer together to produce interdisciplinary studies that can generate new perspectives.'

'Degroot’s Frigid Golden Age is an invaluable model for scholars doing climate history, but it is hardly the last word, and its publication should create opportunities for scholars of gender, indigeneity, or empire to push forward the research.'