Home
The Government's Speech and the Constitution

The Government's Speech and the Constitution 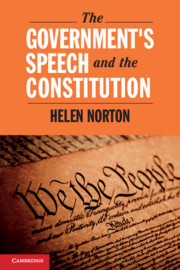 'In The Government's Speech and the Constitution, Helen Norton offers the most comprehensive, thoughtful, and insightful analysis of the constitutionality of government speech ever written. This expansive conception of government speech has been largely unexplored in our scholarly literature, and Norton unpacks these complex issues in an exceptionally original and illuminating manner.'

'A thoughtful, nuanced, and accessible book on a complex and important topic. Norton takes her readers on a rich and rewarding tour of the forms that government speech can take, of the often murky and contested line between government speech and private speech, and of the wide range of constitutional doctrines that shape the legal parameters of government speech.'

'The multiple faces of speech by modern government, and its relationship to the United States Constitution is analyzed by Helen Norton in wonderfully nuanced, panoptic, accessible, and thought-provoking detail. Government control over its speech can become power over ours. What it does with that power thus matters to our constitutional integrity, and Norton very convincingly shows us why. Indeed, no contemporary free speech scholar does so more powerfully, or in a more fair-minded manner.'

'A magnificent account of the constitutional questions raised by ordinary government speech.'

'A fine book that demonstrates the multiple ways that government officials can violate the Bill of Rights and the Fourteenth Amendment through their speech.'

'This is an enormous contribution to our understanding of an often mysterious topic, and the discussion she has sparked will undoubtedly continue.'