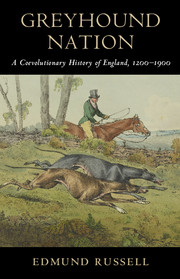 Edmund Russell's much-anticipated new book examines interactions between greyhounds and their owners in England from 1200 to 1900 to make a compelling case that history is an evolutionary process. Challenging the popular notion that animal breeds remain uniform over time and space, Russell integrates history and biology to offer a fresh take on human-animal coevolution. Using greyhounds in England as a case study, Russell shows that greyhounds varied and changed just as much as their owners. Not only did they evolve in response to each other, but people and dogs both evolved in response to the forces of modernization, such as capitalism, democracy, and industry. History and evolution were not separate processes, each proceeding at its own rate according to its own rules, but instead were the same.

'Greyhound Nation offers a provocative, erudite, and persuasive argument about the coevolution of people and dogs. Focusing on greyhounds in England, this fascinating book challenges us to re-think the boundaries between humans and other species - and to re-think our very definition of history.'

'With the careful precision of a lab biologist and the keen eye of an evolutionist, Russell shows how a self-chosen elite of human society created a new kind of animal. The result is an impressive application of science to social history.'

'This impressively original book reframes familiar topics in new and innovative ways. In addition to telling a fascinating story of how changes in society, economics, politics, and technology shaped the evolution of greyhounds, Russell argues that greyhounds in turn shaped human evolution. Creatively exploring and challenging dichotomies that are often assumed to be rigid, he demonstrates that concepts from biology can help to explain historical change.'

'Russell is trailblazing an enticing new path called coevolutionary history … As for canine history, the subjects of Greyhound Nation, in their astonishing variety, pure and impure, rough and smooth, can take their place in a thriving field …'

'… an excellent introduction to an understanding of evolutionary and co-evolutionary history and to the use of evolutionary thinking as a methodology for historical analysis. … The book is a major contribution not only to the field of animal history but also to environmental, technological, legal, economic, sporting, and social history. It demonstrates that following the story of one group of animals can reveal a rich interdisciplinary picture of historical change and the development of modern society.'

‘Russell has given his readers a new tool kit for approaching and understanding the impact of dogs (and other domesticated animals) and humans in each other's intertwined histories.’