The French Revolutionary Left and the Rise of Humanitarianism, 1954–1988 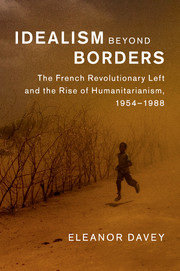 This is a major new account of how modern humanitarian action was shaped by transformations in the French intellectual and political landscape from the 1950s to the 1980s. Eleanor Davey reveals how radical left third-worldism was displaced by the 'sans-frontiériste' movement as the dominant way of approaching suffering in what was then called the third world. Third-worldism regarded these regions as the motor for international revolution, but revolutionary zeal disintegrated as a number of its regimes took on violent and dictatorial forms. Instead, the radical humanitarianism of the 'sans-frontiériste' movement pioneered by Médecins Sans Frontières emerged as an alternative model for international aid. Covering a period of major international upheavals and domestic change in France, Davey demonstrates the importance of memories of the Second World War in political activism and humanitarian action, and underlines the powerful legacies of Cold War politics for international affairs since the fall of the Iron Curtain.

‘Humanitarian agencies, including Médecins Sans Frontières, often struggle to understand current political processes and live in a ‘perpetual present’. This creates major difficulties in recontextualising political processes that could help humanitarian workers and organizations have a better understanding of modern dilemmas and constraints during their daily activities. By describing two activist moments in France, tiers-mondiste and sans-frontièriste, and the process by which one came to displace the other as the dominant way of approaching suffering in the Third World, Eleanor Davey helps us to see how the past is connected to the present, identifying a failure that she rightly underlines as shaping many analyses of humanitarianism. This book is a very interesting account of the intellectual roots of current humanitarianism, and helps us create links between recent 'humanitarian thinking and longer political and intellectual processes of change'.’

‘A masterly and imaginative tracking of French intellectuals’ relationship with global events, from revolutionary Third Worldism to humanitarian intervention. This subtle portrayal of complex debates shaped by the Cold War and decolonisation is conceptually sophisticated, subtle in its analysis, and beautifully written. It is a formidable contribution to the history of the second half of the twentieth century.’

‘As a historian who has worked in the humanitarian sector, Eleanor Davey brings the wisdom of reflected experience to bear on [her] deeply researched study of French engagement for the 'Third World'. She eschews the lazy generalizations that characterize the field by highlighting how the complex analogizing of World War Two memory with contemporary events informed the tension between the politics of emergency relief and social transformation. So long as these conflicting priorities continue, Idealism beyond Borders will remain an essential touchstone for understanding the humanitarian challenges of our time.’

‘The ‘Doctors without Borders’ surged into view in the 1970s, and the muscular way they stepped into dangerous situations to tend to those in need continues to stir hearts and minds. Eleanor Davey has written a rich and incisive history of this new form of activism, which brought contemporary humanitarianism into being. It offers crucial new lenses - of French design and with a very wide angle - to see how the 1970s made the post-9/11 world.’

‘An extremely illuminating book. It busts any simple myth about the founding of Médecins Sans Frontières to tell the full story of the organization's tangled roots in radical French politics. Davey is a very talented historian of ideas and gives an engaging account of the ideological development of one of the world's great humanitarian organizations.’

'A timely contribution to more thoughtful conversations about the imperatives of humanitarian action. … a well-researched investigation of the evolution of French left-wing tiers-mondiste and humanitarian sans-frontie ´riste thought in the second half of the twentieth century convincingly shows how ideas about the revolutionary promise of the Third World were transformed by the observance of Marxist regimes’ atrocities into a neutral or anti-communist ideology of humanitarianism. … an excellent example of rigorous intellectual history that both uncovers the peculiarities of French international idealism between 1954 and 1988 and offers readers much to contemplate as regards humanitarian action in the present.'

'Dense, well-sourced, and [an] erudite piece of historiography … succeeds in offering a fresh perspective to the extant literature.'

'A major contribution to the field. Idealism beyond Borders furnishes nuanced but useful meaning not merely for its immediate arenas of tiers-mondisme and sans-frontierisme, but for a wider ranging shift in left-wing international thought and activism in the second half of the twentieth century.'

'Eleanor Davey’s book makes enjoyable reading, with its caustic and forceful view of the pedigree of ‘sans-frontiérisme’, mapping an intellectual landscape which spreads beyond the borders of France and which is still to a large extent ours to this day.'