A Process of Relational Governance for International Common Interest 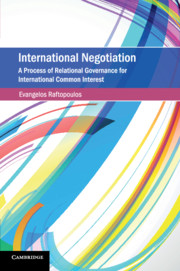 'When I was involved in negotiations for drafting treaties, I often had the feeling that the negotiators, rather than putting forward particular positions, were called to define an international common interest and to envisage a regime subject to future governance and re-negotiation. This book goes beyond feelings and subjects the process of building international common interests to a rigorous analysis within a solid theoretical approach.'