Home
The Islamic State in Britain

The Islamic State in Britain

Radicalization and Resilience in an Activist Network 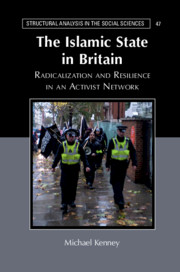 Drawing on extensive field research with activists on the streets of London, Michael Kenney provides the first ethnographic study of a European network implicated in terrorist attacks and sending fighters to the Islamic State. For over twenty years, al-Muhajiroun (Arabic for 'the Emigrants') strived to create an Islamic state in Britain through high-risk activism. A number of Emigrants engaged in violence, while others joined the Islamic State in Iraq and Syria. Kenney explains why young Britons joined the Emigrants, how they radicalized and adapted their activism, and why many of them eventually left. Through an innovative mix of ethnography and network analysis, Kenney explains the structure and processes behind this outlawed network and explores its remarkable resilience. What emerges is a complex, nuanced portrait that demystifies the Emigrants while challenging conventional wisdom on radicalization and countering violent extremism.

'This is an illuminating, beautifully written study of Britain’s most highly publicized, durable radical Islamic group, which established numerous sidewalk stalls to engage passers-by. Kenney spent five years interviewing many group members of different ranks, as well as deeply knowledgeable outsiders, including academics, journalists, and law enforcement officials. No academic has had a deeper contact with a radical Islamic group, a connection that will benefit readers greatly.'

'Based on probing ethnographic research, and skillfully using social network theory, this important and timely book explains how radicalization occurs in Western societies, how small but highly committed Islamist organizations persist and adapt under pressure, and why democratic governments struggle to counter domestic extremism.'

'Kenney spent years talking with members of al-Muhajiroun; he tells us where they came from and how and why they stayed or left. His brilliant and readable results will be required reading for anyone interested in radicalization and deradicalization: security officials, analysts, academics, and citizens who want to get behind the news.'

'Michael Kenney takes us on a journey into Islamist activism through meticulous field work, interviews, and participant observation. This unique investigation brings these militants to life and debunks many of our prejudices based on polemics with little foundation. Anyone interested in Islamist networks must read this book.'

'The Islamic State in Britain is a masterful exploration of one of the most critical security challenges facing Western countries today, militant activist networks. Michael Kenney's highly readable study is at once thorough in research, rich in theory, and judicious in argumentation. A seminal contribution.'

‘This book contains an ethnographic study of al Muhajiroun, an outlawed radical jihadist group in London. Kenney seeks to explain how, despite intense police surveillance, the group survived, attracted adherents, and recruited fighters to join the war in Syria until the British government banned it in 2010. Ideological sympathy, ties of friendship, charismatic leaders, and youthful inexperience led people to join the group … some readers may be surprised by Kenney’s argument that such groups can allow young men to let off steam, thus containing, rather than promoting, violence. As the authorities stamp out these organizations, their disgruntled members may pose an even greater danger.’

'… offers an insightful and refreshingly rigorous and evidence-based perspective on issues of critical concern to policymakers and law-enforcers, among others. It is a very valuable addition to the literature on new religious movements and terrorist networks and deserves a wide readership.'

'An ethnographic study by the author in London’s local Muslim communities of how the al-Muhajiroun-linked network engaged in Islamist activism, and the involvement by some of its adherents in terrorist attacks in the UK, as well as joining the ranks for foreign fighters on behalf of the Islamist State (IS) in Syria and Iraq … Of particular interest is the author’s finding that the UK government’s counter-terrorism’s 'disruption of al Muhajiroun may be considered a success' forcing them to be 'smaller, more fragmented, and less capable than they have been since the earliest days of their activism'.'

‘Through various impressive interviews with the organization’s members, Kenney details how the group mobilized, recruited, sustained collective action, responded to counterterrorism, and handled members who exited the organization. The key contributions of this work are its network analysis of the group and the vast array of interview material. One of Kenney’s significant conclusions is that the Emigrants provided an alternative to violence for younger males prone to radicalization. This insight is new and unique and, coupled with the very interesting interviews, makes this book an impressive read.’