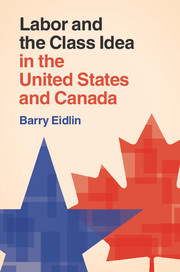 Why are unions weaker in the US than in Canada, two otherwise similar countries? This difference has shaped politics, policy, and levels of inequality. Conventional wisdom points to differences in political cultures, party systems, and labor laws. But Barry Eidlin's systematic analysis of archival and statistical data shows the limits of conventional wisdom, and presents a novel explanation for the cross-border difference. He shows that it resulted from different ruling party responses to worker upsurge during the Great Depression and World War II. Paradoxically, US labor's long-term decline resulted from what was initially a more pro-labor ruling party response, while Canadian labor's relative long-term strength resulted from a more hostile ruling party response. These struggles embedded 'the class idea' more deeply in policies, institutions, and practices than in the US. In an age of growing economic inequality and broken systems of political representation, Eidlin's analysis offers insight for those seeking to understand these trends, as well as those seeking to change them.

'Labor must act increasingly as a class or working women and men are unlikely to be noticed at all. Reviewing class in a comparative frame between the US and Canada, Barry Eidlin’s Labor and the Class Idea in the United States and Canada provides a start to understanding the very different results for workers in the two nations, and particularly variations in political organizing and party building. Organizers and academics can benefit from this research and build on it.'

Larry Cohen - Chair, Our Revolution and Past President, Communications Workers of America

'This book is a must read for all comparativists in political science and sociology. Often observers dismiss the union movements in Canada and the United States as little more than business unions, only pale versions of the historic European tradition, and basically the same. In this excellent book Barry Eidlin puts paid to all three of these contentions. His comparative historical sociology provides nuanced insight into why the two movements followed different trajectories for the last eight decades, with Canadian unions tracing a path based on the 'class idea'. This analysis provides fundamentally innovative insights into the role of the state, party politics, processes of institutional and social change, and thus patterns of inequality in the two countries.'

'Canada and the US share much more than a common border, and yet the two nations display a number of striking differences. Labor and the Class Idea in the United States and Canada explores one of the most significant, and intellectually puzzling, differences: the greater resiliency of organized labor north of the border. Challenging dominant cultural and institutional perspectives, Eidlin’s alternative explanation breaks new empirical and theoretical ground in the study of class and politics. Comparative historical research will never be the same.'

'Deeply immersed in the history of both Canadian and US labor-relations regimes, Barry Eidlin demonstrates that the disparate fate of trade unionism north and south of the border is rooted in politics, not culture, economy, or even the shifting character of labor law. Canadian unions articulated their class interests through an independent political party, while in recent decades those in the United States did not. Labor and the Class Idea is comparative history at its very best.'

'Barry Eidlin has written a new and compelling chapter in the ongoing social scientific account of US-Canadian divergences and similarities. Based on extensive archival research into the politics of labor as related to the US and Canadian states, the analysis in Labor and the Class Idea is richly theorized, contributing to the ongoing revival of attention to class politics in political sociology as well as to understanding the role of states in reshaping categories of power, difference and inequality and the organizational capacities of labor.'

'Labor and the Class Idea in the United States and Canada offers a fresh perspective on two contrasting labor relations regimes. It does this, moreover, with panache and insight, situating the discussion of trade unionism within broader contexts that offer well-researched and imaginative commentary on a host of other issues: McCarthyism and the Red Scare in the labor movement; workers mobilizations and the New Left; and the political articulation of the class idea in state policies and responses to labor upheavals. Eidlin’s expansive study details the divergence in trade union densities in Canada and the United States, at the same time as it sheds light on much broader issues, such as how Canada in 2017 could come to be governed by Justin Trudeau and the Liberals, while the United States witnessed the election of Donald Trump.'

'This book itself is a tribute to the power of a certain idea, taken seriously and transmitted over time. That idea is Trotskyism and the interpretation developed of 20th-century history from within that tradition. … Eidlin’s book adds a compelling postwar addendum to the Trotskyist critique.'

'Spanning nearly a century, Eidlin’s book represents the sort of ambitious cross-national comparative historical analysis that has fallen out of favor in political science yet that can offer rich theoretical insights and fresh descriptive facts that can be mined for scores of future studies.'