Globalization and the German Quest for World Status, 1875–1919 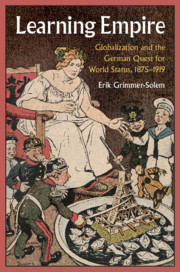 The First World War marked the end point of a process of German globalization that began in the 1870s, well before Germany acquired a colonial empire or extensive overseas commercial interests. Structured around the figures of five influential economists who shaped the German political landscape, Learning Empire explores how their overseas experiences shaped public perceptions of the world and Germany's place in it. These men helped define a German liberal imperialism that came to influence the 'world policy' (Weltpolitik) of Kaiser Wilhelm, Chancellor Bülow, and Admiral Tirpitz. They devised naval propaganda, reshaped Reichstag politics, were involved in colonial and financial reforms, and helped define the debate over war aims in the First World War. Looking closely at German worldwide entanglements, Learning Empire recasts how we interpret German imperialism, the origins of the First World War, and the rise of Nazism, inviting reflection on the challenges of globalization in the current century.

'The history of Imperial Germany is currently being re-written, and Learning Empire is the most sustained and profound intervention yet: A magisterial tour-de-force that establishes Germany as a global player in the decades before World War I. Meticulously documented and driven by a strong vision, it reinstates the middle classes, and economic specialists in particular, as the driving forces behind Germany’s global quest. Impressive!'

'Erik Grimmer-Solem's new book is a sustained tour de force of integrated intellectual and political history, whose impact will surely shift our perspectives on the complicated meanings of the ‘German question’ for the transnational instabilities of global politics in the late nineteenth and early twentieth centuries.'

‘Deeply researched and clearly written, Learning Empire gives afresh account of the origins and development of Weltpolitik by placing it in the context of global economic competition-what Germans in 1900 called Weltwirtschaft-rather than inthe usual framework of national and domestic politics … this reviewer finds Learning Empire to be one of the most important books to appear in the German field in the last twenty years.’

‘… [T]he book provides a thorough exploration of how six ﬁgures’ economic thought shaped political and public debate over Germany’s role in the world. The book also makes clear the distinctive elements of German understandings of empire that built on foreign trade, investment abroad, and informal economic spheres of inﬂuence. By paying attention to economists alongside other well-researched ﬁgures like missionaries or politicians, Grimmer-Solem brings a richer texture to the scholarship on global economics and capitalism in Imperial Germany.’

‘With his book Learning Empire, Erik Grimmer-Solem now provides another exciting perspective which finally puts the phenomenon of globalization in the second half of the nineteenth century into the wider context of the long-dominant view of Germany’s outrageous ‘grab’ for world power.’

‘… [Learning Empire] is a great success, in two senses. First, the book is a gold-mine of information about the experiences abroad of an influential network primarily of academic economists, but also of some key political figures who would come to play central roles in Weltpolitik. The collective picture that emerges here of a group of men influenced by their extensive international experiences is quite striking and persuasive. Second, Grimmer-Solem convincingly points to the 'smoking guns' that link those figures to the evolution of German imperial policy – in private letters, in political and academic appointments, in memoirs, in the details of publication histories of studies of the economics of various parts of the world, and so on.’

‘This book is a remarkable achievement. It succeeds admirably in tracing the imperial imaginary of liberal nationalist political economists and making it and the lineaments of a new age of global politics and economics central to German policymaking, thereby providing a new narrative of the trajectory of German imperialism in the late nineteenth and early twentieth centuries.’

‘Learning Empire is a revisionist work that expands the study of German empire beyond its traditional focus on colonies in Africa and the South Pacific and into the arena of international trade.’

‘… one of the most important books to appear in the German field in the last twenty years. It revises and re-envisions many of the turning points that defined foreign and domestic policy …’