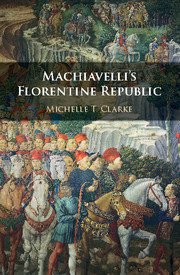 What do modern republics have to fear? Machiavelli's Florentine Republic reconstructs Machiavelli's answer to this question from the perspective of the Florentine Histories, his most probing meditation on the fate of republican politics in the modern age. It argues that his principle goal in narrating the defeat of Florentine republicanism is to debunk the views of leading humanists concerning the overall health of republican politics in modernity and the distinctive challenges that modern republics should expect to face. The Medici family had exposed these vulnerabilities better than anyone else, and Machiavelli reconstructs their political strategy to show how conventional ideas of moral and political virtue are the most potent instruments of princely ambition in a city that wants to be free.

'Machiavelli’s Florentine Republic accomplishes much more than repairing the gap in the Anglophone scholarship on Machiavelli’s notoriously elusive Florentine Histories. This clear-sighted, savvy, and compelling interpretation deserves to be read by all interested in republicanism - its history, its meaning, and its ramifications. Clarke’s interpretation is sure to change the course of the scholarly conversation as it establishes Machiavelli’s critical evaluation of his city’s republican government and elucidates his understanding that the modern political problem derives from Rome’s ancient dominion.'

'Machiavelli’s Florentine Histories is the last of his major works to receive intensive scholarly attention. Because it is a history, his voice is more muted than in his more explicitly theoretical works and there is a seemingly overwhelming mass of factual detail. Clarke has made a major step forward in deciphering the argument of this difficult book, particularly by bringing out the differences between Machiavelli and his civic humanist predecessors, Leonardo Bruni and Coluccio Salutati.'

'Michelle Clarke’s illuminating study of the neglected Florentine Histories reestablishes Machiavelli’s republican credentials in a new light. She situates the Histories between Machiavelli’s two better known works and gives us a new appreciation of his political theory as a whole. This excellent book offers a fresh and refreshingly independent approach to Machiavelli and the study of modern political thought.'

'Michelle Clarke's Machiavelli’s Florentine Republic advances our understanding of Machiavelli in distinctive ways. Not only does Clarke carefully and persuasively show how Machiavelli rejected the historiography of predecessors like Salutati, but she also shows us a Machiavelli more skeptical of Rome - and its imperial project - than he is often made out to be. The clear and crisply written book deeply engages with Machiavelli’s context, and makes important and timely contribution to key debates in Machiavelli scholarship. Readers of Machiavelli will benefit greatly from this study.'

'A rich scholarly literature has studied Machiavelli’s paramount role within modern republican political theory. Only a few works have reconstructed Machiavelli’s reflections on the Florentine republican experience that he contributed to shape. Michelle T. Clarke’s book offers us an excellent, elegantly written, account of Machiavelli’s considerations on the weaknesses of the Florentine republican elite that paved the way to the Medicean regime. Her work enriches our understanding of the history of republicanism and invites us to meditate from a fresh perspective on the weaknesses of the republics of our times.'

'… this is by far the best book-length treatment in English of Machiavelli's longest work. Intelligent, erudite, and spirited, it should command the attention of diverse scholars and is sure to help revive interest in Machiavelli's Florentine Histories.'