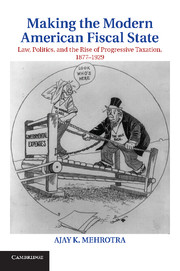 At the turn of the twentieth century, the US system of public finance underwent a dramatic transformation. The late nineteenth-century regime of indirect, hidden, partisan, and regressive taxes was eclipsed in the early twentieth century by a direct, transparent, professionally administered, and progressive tax system. This book uncovers the contested roots and paradoxical consequences of this fundamental shift in American tax law and policy. It argues that the move toward a regime of direct and graduated taxation marked the emergence of a new fiscal polity - a new form of statecraft that was guided not simply by the functional need for greater revenue but by broader social concerns about economic justice, civic identity, bureaucratic capacity, and public power. Between the end of Reconstruction and the onset of the Great Depression, the intellectual, legal, and administrative foundations of the modern fiscal state first took shape. This book explains how and why this new fiscal polity came to be.

‘Mehrotra has crafted a narrative that is fundamental to understanding the modern American state. By unearthing the intellectual, economic, political, and emotional spade work required to lay the groundwork for a major conceptual change in public policy, he shows how a highly decentralized, politicized, and indirect method of taxation was transformed into a centralized, neutrally administered, direct method of taxation with great potential to achieve redistributive ends.’

‘An important contribution to the intellectual, economic, legal, and political history of the American system of taxation; a much needed exploration of the way in which the progressive income tax replaced an earlier system of tariffs and miscellaneous imposts. Because taxes are the fuel that keeps the machinery of government going and that, in large measure, determine how much government can actually do, a rigorous and comprehensive exploration of how the system developed helps us understand our present situation and where, perhaps, we might be heading.’

‘A fascinating, nuanced account of the intellectual and legal roots of modern progressive taxation in the United States, which established a new form of fiscal citizenship, a newly muscular administrative apparatus, and a new set of revenues that would fuel the American century, but also foreclosed other options. A must-read for those interested in the formation of the American state and the origins of contemporary tax politics.’

‘In this panoramic interpretation of taxation, Mehrotra convincingly demonstrates that the modern state owes its very existence to a reconceptualization of communal responsibility in which the ‘ability to pay’ became a moral obligation and, thus, a policy principle.’

‘Mehrotra’s book refines and extends the historical narrative on the rise of modern American statecraft. The development of the new tax systems this book cogently documents not only allowed a relatively young and newly emergent nation to participate meaningfully in world affairs, but also firmly established modes of governance that would ultimately define the reformist political economy of the mid-twentieth-century United States.’

'This is a truly impressive work of legal historical scholarship - thoroughly researched, well written, and powerfully argued. Mehrotra also offers a masterful demonstration of scholarly synthesis, artfully weaving together an intricate tapestry of economics, politics, law, and social history … This book serves as a model for legal historians who are looking to integrate fine-grained, nuanced analyses of historical events and actors with the kind of big-picture ideas that most readily engage our fellow legal scholars. This is a book that illuminates a fundamental transformation of the American state, a transformation in whose shadow we obviously live today.'

'Making the Modern American Fiscal State will be essential reading for US historians, historians of other modern fiscal states, and anyone interested in the historical roots of contemporary political debates about wealth, power, and inequality … any student of these subjects will be indebted to Mehrotra’s rich analysis. This is the sort of book that bears the mark of a long gestation - that was worth it.'

'How is a fiscal state crafted? What is fiscal citizenship? It is with these fundamental questions that this fascinating, well-written, thoroughly researched, and convincing book wrestles. This book is not only for those dedicated to the history of taxation; readers with an interest in the history of economics, the rise of professionalism and expertise (particularly of the legal and economic varieties), politics, populism, and propaganda will also find Mehrotra’s book thought provoking.'