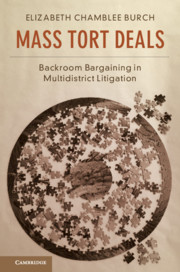 Mass-tort lawsuits over products like pelvic and hernia mesh, Roundup, opioids, talcum powder, and hip implants consume a substantial part of the federal civil caseload. But multidistrict litigation, which federal courts use to package these individual tort suits into one proceeding, has not been extensively analyzed. In Mass Tort Deals, Elizabeth Chamblee Burch marshals a wide array of empirical data to suggest that a systematic lack of checks and balances in our courts may benefit everyone but the plaintiffs - the very people who are often unable to stand up for themselves. Rather than faithfully representing them, plaintiffs' lawyers may sell them out in backroom settlements that compensate lawyers handsomely, pay plaintiffs little, and deny them the justice they seek. From diagnosis to reforms, Burch's goal isn't to eliminate these suits; it's to save them. This book is a must read for concerned citizens, policymakers, lawyers, and judges alike.

‘In Mass Tort Deals, Elizabeth Chamblee Burch exposes the corrupt inner workings of multi-district litigation to the light of day. By bringing both the fly's eye for detail and the eagle's eye for grand design to bear on mass tort settlements, she shows how repeat-playing plaintiffs' attorneys and defendants operating in the near-absence of rules use the MDL to enrich themselves, while judges, who care mainly about establishing reputations as settlement facilitators, tolerate and even encourage conduct they ought to condemn. If federal judges ever look back with shame upon their actions, which fostered a Wild West of litigation in which lawlessness enabled self-interested plaintiffs' lawyers and defendants to enrich themselves at the expense of injured claimants, Professor Burch will deserve much of the credit.'

‘Mass Tort Deals is terrific - one of the most important books to come out about the American tort system in recent memory. The stories Burch tells are riveting, sometimes shocking. The book combines groundbreaking empirical research with clear writing and it is easy to see why she is outraged at much of what she finds. Her sharp analysis lays bare the problems and successes of the billion dollar deals that resolve large scale harms, and she provides serious proposals for fixing what's wrong with the system. Critics and proponents of the tort system alike – not only lawyers! - should read this book.'

Alexandra Lahav - Ellen Ash Peters Professor, University of Connecticut and author of In Praise of Litigation

‘Mass Tort Deals is a landmark achievement. No development this century is more significant to American civil justice than the emergence of the mass tort system. Combining exhaustive research with novel and sophisticated analysis, Elizabeth Chamblee Burch shows how this system often favors the powerful over the powerless. Her eminently readable book challenges judges and lawyers to do better for thousands of injured victims, and it charts a wise path forward. This is impactful scholarship, the very best that the legal academy can offer.'

‘Mass Tort Deals is a fearless, detailed examination of the danger that plaintiffs may be twice victimized, first by a product or practice that causes them harm, and next by a justice system in which deals are driven by corporate defendants, repeat-player lawyers, and settlement-driving judges who may lose sight of the needs of the victims.'

‘Elizabeth Chamblee Burch, one of the nation's most respected academic commentators on large scale litigation, has written a unique and striking analysis of the inner workings of these cases, which represent the frontier of American civil litigation. Because they involve pharmaceuticals, body implants, opioids, and an array of consumer products from electronics to talcum powder, they affect millions of Americans. Her portrayal of the conduct of insiders is not pretty. Everyone potentially affected by these cases will benefit from reading this book, as will all policy makers interested in improving how our courts function.'