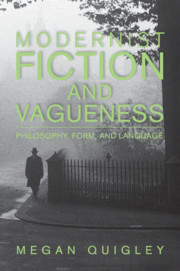 Modernist Fiction and Vagueness marries the artistic and philosophical versions of vagueness, linking the development of literary modernism to changes in philosophy. This book argues that the problem of vagueness - language's unavoidable imprecision - led to transformations in both fiction and philosophy in the early twentieth century. Both twentieth-century philosophers and their literary counterparts (including James, Eliot, Woolf, and Joyce) were fascinated by the vagueness of words and the dream of creating a perfectly precise language. Building on recent interest in the connections between analytic philosophy, pragmatism, and modern literature, Modernist Fiction and Vagueness demonstrates that vagueness should be read not as an artistic problem but as a defining quality of modernist fiction.

'Megan Quigley has succeeded in two ways. Her book is not only a wholly succinct review of the element of vagueness in modernist writing, but a work which inspires readers to discover for themselves new connections between philosophy and literature.'

'The philosophic and literary figures in this book have long been canonical and so long been the subjects of critical industries; Quigley provides not only new ways to read them, but also, in her thorough bibliographic work, a resource for literary scholars … This is a book that is both dense with information and still a pleasure to read.'

'Modernist Fiction and Vagueness offers a compelling new interdisciplinary approach through which to account for the relationship between English language literary modernism and the two predominant countervailing forces in twentieth-century Anglo-American philosophy.'

'Modernist Fiction and Vagueness affords us a rich and nuanced portrait of a conceptual quandary - equal parts philosophical and literary - that in its grandest implications can help us to rethink how we read, and to what end.'

'… one of the most fantastic implications of Quigley’s book is that not only were early twentieth-century philosophers and writers involved in a much profounder dialogue than our intellectual histories typically admit, but that in many ways the period’s philosophies of formal precision and language-based objectivity needed to be inflected through modernist art … Given the brood and convincing array of evidence Quigley amasses to prove this point, perhaps the greatest question left by Modernist Fiction and Vagueness is why few people have written anything like it before now.'