Imagining the Sovereign in Colonial India 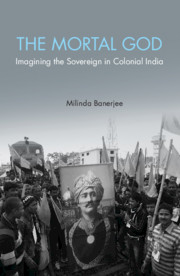 The Mortal God is a study in intellectual history which uncovers how actors in colonial India imagined various figures of human, divine, and messianic rulers to battle over the nature and locus of sovereignty. It studies British and Indian political-intellectual elites as well as South Asian peasant activists, giving particular attention to Bengal, including the associated princely states of Cooch Behar and Tripura. Global intellectual history approaches are deployed to place India within wider trajectories of royal nationhood that unfolded across contemporaneous Europe and Asia. The book intervenes within theoretical debates about sovereignty and political theology, and offers novel arguments about decolonizing and subalternizing sovereignty.

‘This is a book of exceptional quality, range and interest, exploring the complex and protean questions of sovereignty, rulership and kingship in nineteenth- and twentieth-century India. British proconsuls, administrators and intellectuals, the ruling princes, South Asian nationalists, lower caste communities, and the messianic politics which linked elite nationalism and popular protest, all engaged with these issues, and from many different perspectives. This deeply researched and beautifully constructed book is a significant contribution to the political and intellectual history of South Asia during the time of British imperial rule, which also sets these still resonant and unresolved issues in a much broader and necessary global context.'

‘This is a remarkably original study of the sovereign and sovereignty as figures of political thought in modern India. Looking at the many ways in which European, Central Asian and Indian notions of sovereign power have interacted with one another from colonial time into the present, Banerjee makes a striking argument for the importance of the category's democratization in India's political life. Departing from conventional ideas about the centralization and monopoly of sovereignty, he shows how it became possible in India to think about ordinary individuals themselves becoming kings and even divine sovereigns in both philosophical and popular terms.'

‘This book shows how ideas of sovereignty and self-determination developed in the South Asian nation-states and neighboring regions. Politically, these states had always been affected by a degree of religiosity. And as the sacred mingled with the secular, the universal merged in the local, the traditional in the modern, the alien in the indigenous. Concomitantly, there was an admixture of the colonial and post-colonial, Western and Asian, and the regional with activities beyond the border. Add to this the ultimate dichotomy of man and God, and you have the Hobbesian interplay of opposites which gives Banerjee's book its fascinating title. Altogether, a most valuable and elevating instance of historical work.'

‘Erudite and empirically expansive, this book positions itself on the intersections of comparative political thought, global intellectual history, and the challenge of conceptual translation. Stitching together notions of sovereignty, divinity, and democracy across a wide range of contexts both within and beyond South Asia – colonial, national, local, even global – this book opens up whole new worlds of political vocabulary whilst juxtaposing them in fascinating and compelling ways. Can notions of ‘kingship' serve as a precursor for conceptualizations of ‘citizenship'? How might notions of ‘divinity' draw together groups marked by dramatic forms of ‘diversity'? These are the sorts of questions that Banerjee asks, and answers, on every page of this book.'

‘The Mortal God is a thoughtful contribution to an emerging literature on the global and comparative histories of sovereignty. Banerjee proceeds from the vantage of Bengali political thought to examine the intimacy between claims about the singular figure of the king and the democratic figure of the people. His inclusion of agrarian and caste-based political movements within the scope of this intellectual history is one of the book's most refreshing features. This is a work that advances the agenda of both global intellectual history and comparative political theory.'