Home
Murder in the Shenandoah

Murder in the Shenandoah 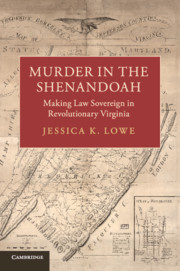 On July 4, 1791, the fifteenth anniversary of American Independence, John Crane, a descendant of prominent Virginian families, killed his neighbor's harvest worker. Murder in the Shenandoah traces the story of this early murder case as it entangled powerful Virginians and addressed the question that everyone in the state was heatedly debating: what would it mean to have equality before the law - and a world where 'law is king'? By retelling the story of the case, called Commonwealth v. Crane, through the eyes of its witnesses, families, fighters, victims, judges, and juries, Jessica K. Lowe reveals how revolutionary debates about justice gripped the new nation, transforming ideas about law, punishment, and popular government.

'In Murder in the Shenandoah, Jessica K. Lowe deftly investigates a deadly brawl to illuminate the legal culture of the new nation's most influential state, shortly after the American Revolution. Filled with plot twists, surprising revelations, colorful characters, and rich insights, this book will reward anyone interested in the roots of American criminal law.'

'Elegantly written and copiously sourced, Jessica K. Lowe’s book is a must-read for specialists and students alike. Lowe upends the accepted notion that southerners went outside the law to resolve conflicts because of the culture of honor that was inextricably embedded in slavery. She uses criminal law to open a window into social change in postrevolutionary Virginia and to set the stage for antebellum-era conflicts in imaginative and unexpected ways.'

'Jessica K. Lowe's beautifully crafted account of murder and justice powerfully illuminates the reconstruction of criminal law in the early American republic. Lowe skillfully turns the story of a single Virginia killing into a compelling meditation on how people, high and low, struggled over the meaning of equality and the rule of law in the aftermath of revolution. A formidable piece of scholarship, Murder in the Shenandoah is also a gem of historical narration and analysis, at once tough-minded and humane.'

Sean Wilentz - author of The Rise of American Democracy: Jefferson to Lincoln

'Professor Lowe has produced a volume that is both a murder mystery and a mini-treatise on the history of criminal law in colonial Virginia. Hard-nosed legal history has seldom been presented in such fascinating, readable form. Behind the legal story is an equally important story of social change in early Virginia. Lowe knows her Virginia law, and applies to it the questions of a modern historical sensibility. Readers will be surprised and intrigued by this admirable volume.'

'In Jessica K. Lowe’s poetic telling of a murder trial in the Shenandoah Valley on Independence Day in 1791, we see how issues of class, violence, and the rule of law came together to lead to the execution of a Virginia patrician. Lowe’s beautifully written book shows the law in motion. Wage workers, slaves, jurors, and the legal and planter elite all cross her stage as the values of democracy made a new American law.'

Alfred L. Brophy - author of University, Court, and Slave: Proslavery Thought in Colleges and Courts and the Coming of Civil War

‘Lowe has written an engrossing and powerfully argued book that deserves widespread attention.’