Home
Nature, Society, and Justice in the Anthropocene

Nature, Society, and Justice in the Anthropocene 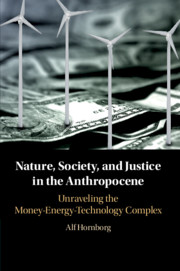 Are money and technology the core illusions of our time? In this book, Alf Hornborg offers a fresh assessment of the inequalities and environmental degradation of the world. He shows how both mainstream and radical economists are limited by a particular worldview and, as a result, do not grasp that conventional money is at the root of many of the problems that are threatening societies, not to mention planet Earth itself. Hornborg demonstrates how market prices obscure asymmetric exchanges of resources - human labor, land, energy, materials - under a veil of fictive reciprocity. Such unequal exchange, he claims, underpins the phenomenon of technological development, which is, fundamentally, a redistribution of time and space - human labor and land - in world society. Hornborg deftly illustrates how money and technology have shaped our thinking and our social and ecological relations, with disturbing consequences. He also offers solutions for their redesign in ways that will promote justice and sustainability.

‘Have you ever wondered just what is the ultimate driving force behind the Anthropocene, the proposed new epoch in Earth history? It's our love of money. This book unravels the complex, profound force of money, not only to structure a global economy but also to destabilise the climate system and drive the Earth's biosphere towards its sixth great extinction event. Alf Hornborg's latest book is a must-read for anyone who wants to understand not only how a feature of everyday life that we all take for granted has the power to disrupt the functioning of an entire planet, but what we can do about it.'

Will Steffen - Former executive director of the International Geosphere-Biosphere Programme (IGBP), Københavns Universitet and author of Global Change and the Earth System: A Planet under Pressure

'Alf Hornborg’s magnum opus is a bracing challenge to the two main streams of progressive critique of capitalism and the ecological crisis: the Marxist and the posthumanist. Both are going to have to engage seriously with Hornborg’s argument, the essence of which is that power resides in the artifacts that rule our lives and that these artifacts - money and technology - are human constructions. Radical social change, including an adequate response to the unfolding catastrophe of the Anthropocene, requires that humans redesign those artifacts. It's a powerful, thought-provoking argument. If it's right it points to a new direction out of the self-destructive impasse in which humanity finds itself.'

Clive Hamilton - Charles Sturt University and author of Growth Fetish, Affluenza, Requiem for a Species, Earthmasters: Playing God with the Climate and Defiant Earth: The Fate of Humans in the Anthropocene

'Exploding illusions about the neutrality of technology, this innovative work centers on the role of money and technology in obscuring the fundamental inequalities in the flow of ecological resources that underpin capitalism and the global economic order. It should prove essential reading for all those seeking clarity on the injustice and environmental calamities of our times. Defending science and analytic rigour even as it gives an ear to their posthumanist critics; drawing on Marxism and Actor-Network Theory even as it quarrels with them, Hornborg invites us to think beyond conventional political understandings and their familiar categories. In exploring the confusions and evasions of current thinking on the nature-society divide, he opens up questions about value, progress, and the quest for wealth that are never asked by mainstream economists, and seldom even by their critics.'

Kate Soper - London Metropolitan University; author of What Is Nature?: Culture, Politics and the Non-Human

'Alf Hornborg’s Nature, Society and Justice in the Anthropocene throws down the gauntlet. The Anthropocene, he argues, exposes  two of industrial capitalism’s founding principles consolidated at the historical zenith of the British Empire. First, that economics is concerned with money and market prices, and need not consider nature, and second that engineering harnesses natural forces with no need to consider the structure of world society. It is this distinctively modern form of thought which must be challenged, ontologically and politically. Curbing asymmetric global resource flows and climatic catastrophe, will require less a tinkering with carbon emissions than a radical rethink and redesign of the artifacts - the money-energy-technology complex - of modernity. A bravura performance and endlessly provocative … [this] is a book that commands our attention and a response.'

'Cutting through the illusions that are blinding humanity to the reasons for our ecologically destructive trajectory … Alf Hornborg identifies the root cause of this trajectory and offers what is possibly the only practical way of altering it. He builds on, further defends and also goes beyond the arguments of his earlier work … in which he showed how the fetishism of commodities and of the technology it has generated have structured human relationships on a global scale to facilitate the maximum exploitation of labour and resources … In this work, he shows how these fetishes are aspects of the development of general-purpose money with its tacit assumption that all values are commensurable … Hornborg proposes a new form of money and shows how this could enable people to escape from the global system of exploitation and thereby avert global ecological destruction. This book is a major advance in the struggle to save civilization from the collapse of the current regime of the global ecosystem.'

Arran Gare - Swinburne University of Technology, Melbourne and author of Philosophical Foundations of Ecological Civilization: A Manifesto for the Future

'For those concerned with blunting and reversing the burgeoning challenges to biospheric sustainability inherent in the dynamics of the Anthropocene, Alf Hornborg’s deep dive into social theory is a must read. Through a critique not just of the fields of economics and engineering and their contributions to our dilemma, but also of Actor Network Theory (ANT), posthumanism, environmental humanities, and ecological Marxism, Hornborg lays the ontological groundwork for his own proposal that focuses on redesigning the human artifact of money as a way out of the crisis of the Anthropocene. Along the way, readers will be treated to Hornborg’s engagement with and critique of other scholars debating the Anthropocene, and to his insights on the continuing relevance of Karl Polanyi, the global nature of technology, the flaws in proposals to substitute biofuels for fossil fuels, animism, and the agency (or not) of objects in the 'Human Era'.'

Robert B. Marks - Whittier College, California and author of The Origins of the Modern World: A Global and Ecological Narrative from the Fifteenth to the Twenty-First Century

'You may or may not agree with his proposal for 'redesigning money' to achieve community sufficiency, but Alf Hornborg's thesis in Nature, Society, and Justice in the Anthropocene is stimulating and provocative. He argues that while global socio-ecological relations today are organised by - 'money' and 'technology' - each is simply a fetishised 'cultural artifact'. Economics operates in a sealed-off idealised world with no capacity to engage the thermodynamic materiality of life on Earth. Likewise, people treat technology as ’a given’, rather than creation of a certain socio-historical formation. The book is clearly critical of neoliberal capital but the author's anthropological experience distances him from some eurocentric assumptions in Marxism. Equally, he has a mixed response to analyses framed by Latour's Actor Network Theory. Hornborg's text speaks to the concerns of environmental economists, students of political economy, activists, policy advisors, and is a welcome contribution to eco-socialist debates.'

Ariel Salleh - University of Sydney and author of Ecofeminism as Politics: Nature, Marx and the Postmodern

'This book is ecological economics at its best. It explains the links between energy, money and growth and it makes a passionate call for redesigning money.'

'A sweeping and deeply original analysis of how universal money has interpenetrated and mediated the modern coevolution of social and natural worlds. Alf Hornborg critiques the failure of local and regional analyses of technology and trade and takes on global analyses as well. Addressing unconstrained universal money is key to escaping the rush toward greater inequality and human suffering, climate change, and the sixth extinction.'

Richard B. Norgaard - University of California, Berkeley and author of Development Betrayed: The End of Progress and a Coevolutionary Revisioning of the Future

'With money, capitalism, Marxism, political ecology, environmental degradation, and justice as anchoring themes, Hornborg ranges widely across many aspects of current anthropology (including its fringes). The book is important reading for scholars of these topics, and for all concerned about the future of humanity and the earth. Hornborg proposes that problems of the environment and justice call for a redesign of money for local use only within each nation, existing alongside regular currencies.'

'Among advocates of Degrowth, Hornborg stands out in proposing the radical, practical alternative of reforming the money system to enable the reconstruction of the relationship between people and planet.'