Permanent Temporary Status in the Gulf 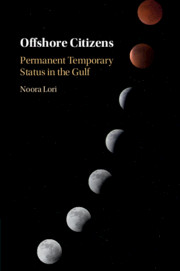 When it comes to extending citizenship to certain groups, why might ruling elites say neither 'yes' nor 'no', but 'wait'? The dominant theories of citizenship tend to recognize clear distinctions between citizens and aliens; either one has citizenship or one does not. This book shows that not all populations are fully included or expelled by a state; they can be suspended in limbo - residing in a territory for protracted periods without accruing citizenship rights. This in-depth case study of the United Arab Emirates uses new archival sources and extensive interviews to show how temporary residency can be transformed into a permanent legal status, through visa renewals and the postponement of naturalization cases. In the UAE, temporary residency was also codified into a formal citizenship status through the outsourcing of passports from the Union of Comoros, allowing elites to effectively reclassify minorities into foreign residents.

‘This pathbreaking book asks the critical yet curiously understudied question of how citizenship in Arab Gulf states is constructed - a question with great stakes given the benefits of nationality in the small, oil rich countries of the region. Lori identifies a new approach to dealing with domestic minorities while constructing national communities - the outsourcing of national membership.'

‘Offshore Citizens might also have been titled 'Kafka Comes to the Middle East'. We learn that, as in Kafka's parable ‘Before the Law', many in the United Arab Emirates await their turn to enter the exalted status of citizenship but are denied, even though they wait dutifully their entire lives. Noora Anwar Lori tells the tale of the many ‘permanent temporary' guest workers whose citizenship is ‘outsourced' to the tiny Union of Comoros, which supplies them with passports although they have no connection to the country. These persons live in a permanent limbo in the UAE, even though they were born in the Emirates and have never known anywhere else. Surreal and disturbing, but all too real for those permanent non-Arab guest workers who live it. A fascinating study of the ‘spectrum' of citizenship statuses in the region with the world's largest proportion of non-citizens.'

'In short, this book is a remarkable piece of scholarship. It theorizes the question of precarious citizenship among settled groups and migrants that do not fit the historical narrative of postcolonial states. It shows how precarious citizenship evolved historically and how contemporary migration ‘management’ tools, such as the issuance of biometrical identification cards, compounds these individuals’ precarious citizenship status. Most importantly perhaps, the book accounts for the disturbing effects that bureaucratic practices have on the lives of people in countries that have the means to integrate these people in their citizenship regimes but choose not to do so.'

‘This volume by Lori (Boston Univ.) is an outstanding display of erudition along several dimensions … This is a necessary addition to any collection on international law and for researchers interested in Gulf politics.’

‘Lori’s original empirical data and innovative concept formation make Offshore Citizens an important and welcome contribution to the burgeoning literature on citizenship and immigration policies in the Global South.’