Anticolonial Elites, Sovereign Rights, and the Economic Culture of Decolonization 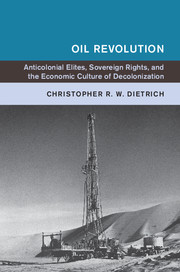 Through innovative and expansive research, Oil Revolution analyzes the tensions faced and networks created by anti-colonial oil elites during the age of decolonization following World War II. This new community of elites stretched across Iran, Iraq, Saudi Arabia, Venezuela, Algeria, and Libya. First through their western educations and then in the United Nations, the Arab League, and the Organization of Petroleum Exporting Countries, these elites transformed the global oil industry. Their transnational work began in the early 1950s and culminated in the 1973–4 energy crisis and in the 1974 declaration of a New International Economic Order in the United Nations. Christopher R. W. Dietrich examines how these elites brokered and balanced their ambitions via access to oil, the most important natural resource of the modern era.

'Dietrich’s Oil Revolution is a triumph of research and writing. This is an indispensable book, illuminating the central role petroleum played in the transition from the global Keynesianism of the 1960s to the neoliberalism of the 1980s. A tour-de-force synthesis of intellectual, political, and economic history.'

'In this compelling history, Dietrich takes the international politics of oil as a starting point to not only explore how Third World elites offered revolutionary new claims for economic sovereignty but also to demonstrate the absolute centrality of the global South in the making of the late twentieth century world.'

'A game-changing account of where the ideas that matter to the world economy come from. Dietrich traces the work of the Arab and kindred anticolonial intellectuals who led the successful movement for national sovereignty over natural resources.'

Robert Vitalis - University of Pennsylvania and author of the forthcoming Oilcraft

'As Dietrich shows in this brilliant and essential new account, the oil crisis of 1973–74 culminated in a decades-long anti-colonial campaign, waged by Third World elites for control of economic resources. Dietrich expands our understanding of the politics of oil and achieves new vantage on global change. His achievement is vital reading for students of post-1945 international politics and economics.'

'An outstanding book on the relationship between sovereignty and international economic justice, highlighting how the search for fairer oil prices changed some of the most fundamental aspects of international affairs.'

O. A. Westad - Harvard University, Massachusetts and author of The Cold War: A World History

'In this beautifully conceived study, Christopher R. W. Dietrich uses the history of sovereign rights over oil to show the power and the profound limits of legal ideas during the era of decolonization and its aftermath. For anti-colonial elites, sovereign rights redressed past wrongs and also democratized global politics, but their vision ultimately foundered under the burden of sovereign debt. Highly recommended.'

'This work weaves together the history of oil from the 50's through the 70's with a post-colonial struggle for international economic justice. It is at once an analytical account of international economic history and of international law through the eyes of anti-colonial elites who sought an end to their countries’ underdevelopment by claiming sovereignty over their natural resources. Beautifully researched, this compelling book is a testament to Dr Dietrich’s keen ability to elucidate this critical period of twentieth century global history.'

'This volume (a revised doctoral dissertation) is well researched and persuasively argued. Dietrich believes sovereign rights’ advances brought about a 'profound change in human history', yet they did not inaugurate a new international economic order, equalizing conditions of global north and south. Recommended.'

'The originality of the research, especially the excavation of the pivotal role played by transnational oil elites, makes the book an important resource for scholars of international history and international political economy. Indeed, no concise, thorough, and readable narrative of this period in oil history has been available until the publication of this book.'

'By taking oil elites, anticolonial elites in general, and their ideas seriously and by treating them respectfully though not uncritically, Dietrich has reminded us that while the powerful generally prevail, the ideas and actions of the less powerful are important and can have an impact.'

'In his superb account of anticolonial elite networks, decolonization, and the twentieth-century history of global oil, Christopher R. W. Dietrich contributes to a number of different strands of scholarship. … Oil Revolution should be considered one of those transformative texts that both breaks new ground in terms of how historians understand the evolution of the international oil economy and lights the way towards a multitude of new histories of the decolonizing, post-colonial and Cold War era.'

'Dietrich’s book is an outstanding piece of scholarship, which engages the entangled histories of economic decolonization and international law.'

'Dietrich provides a rich history of ideas, linking the work of the new elite on the nature of oil concessions to an array of European and American intellectuals concerned with international law and economic development, such as Albert O. Hirschman and Gunnar Myrdal … There is much to recommend in this work and its careful construction of the new international arena from an alternative perspective.'