The Legal History of Sexual Offences in Mandate Palestine 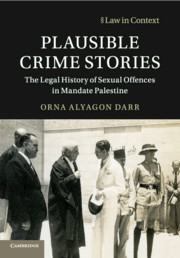 Plausible Crime Stories is not only the first in-depth study of the history of sex offences in Mandate Palestine but it also pioneers an approach to the historical study of criminal law and proof that focuses on plausibility. Doctrinal rules of evidence only partially explain which crime stories make sense while others fail to convince. Since plausibility is predicated on commonly held systems of belief, it not only provides a key to the meanings individual social players ascribe to the law but also yields insight into communal perceptions of the legal system, self-identity, the essence of normality and deviance and notions of gender, morality, nationality, ethnicity, age, religion and other cultural institutions. Using archival materials, including documents relating to 147 criminal court cases, this socio-legal study of plausibility opens a window onto a broad societal view of past beliefs, dispositions, mentalities, tensions, emotions, boundaries and hierarchies.

'This remarkable book, by one of Israel’s leading legal historians, explores the fascinating history of sex crimes in mandatory Palestine. Innovative and theoretically sophisticated, it is a must-read for historians of law, but also for anyone interested in the social and cultural context in which the law of evidence, and criminal law, are embedded.'

'Darr’s masterful study of evidence law in Mandate Palestine decouples absolute truth from knowledge derived through its social context. With keen awareness of the differences among British colonials and Arab and Jewish subjects, she shows how sexual offenses pose particular challenges to courts. What we consider fact is often simply a legal presumption.'

'This is a deft historical case study of the law in action in a colonial context with broad significance. Based on court records relating to sexual offences during the British Mandate in Palestine, Darr examines colonial and local attitudes to sex and its regulation in a multicultural situation and shows that whether evidence and narratives are accepted as plausible is intimately related to the local political, social and religious context.'

'Her clear and empathetic writing evinces the kind of compassionate care (without compromising attention to detail) that one would offer a friend of loved one who was hurt five minutes ago. Her descriptions of the horrific crimes people experienced, the betrayals in other people's versions, the humiliating and dehumanizing medical examinations children had to undergo, read as fresh now as they must have felt to these people a hundred years ago. It makes one wonder about the impact that these open wounds had on the cultural psyche of the Jewish and Arab peoples, and the extent to which unspoken trauma and injury have fed into the larger mess that is today's Israeli-Palestinian conflict.'

'Alyagon Darr’s fascinating study is beautifully written, displaying keen attention to detail and sensitivity to the highly contentious subject matter. It is highly recommended for anyone interested in the history of sex crimes, the cultural history of legal procedure, or the complex relationship between law and colonialism.'

'Like all good scholarly monographs, Orna Alyagon Darr’s terrific book … is in fact several books in one. For historians of Britain and the Middle East, [it] provides an illuminating addition to scholarship on the British Mandate in Palestine by incorporating a gendered approach to its legal history. For legal scholars, and especially historians among them, [it] emphasizes the importance of a history of evidentiary and procedural norms and practices, rather than the more commonly studied substantive fields. Similarly, [it] provides specialists in evidence law a much-needed historicization and rationale for many of its ostensibly neutral doctrinal norms, such as the requirement of corroboration in cases of sexual assault. Finally, for activists and scholars interested in understanding the complexity of sex offences, Darr provides an important historicization of their legislation and adjudication, a history that defamiliarizes much that we take for granted about sex offences by uncovering their roots in colonial systems and discourses.'