Home
Playing by the Informal Rules

Playing by the Informal Rules

Why the Chinese Regime Remains Stable despite Rising Protests 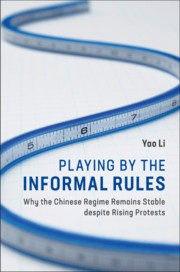 Growing protests in non-democratic countries are often seen as signals of regime decline. China, however, has remained stable amid surging protests. Playing by the Informal Rules highlights the importance of informal norms in structuring state-protester interactions, mitigating conflict, and explaining regime resilience. Drawing on a nationwide dataset of protest and multi-sited ethnographic research, this book presents a bird's-eye view of Chinese contentious politics and illustrates the uneven application of informal norms across regions, social groups, and time. Through examinations of protests and their distinct implications for regime stability, Li offers a novel theoretical framework suitable for monitoring the trajectory of political contention in China and beyond. Overall, this study sheds new light on political mobilization and authoritarian resilience and provides fresh perspectives on power, rules, legitimacy, and resistance in modern societies.

'Playing by the Informal Rules tackles the important question of why we see regime resilience amidst high frequency of protests in China. Yao Li argues the answer lies in the state’s use of informal norms in managing contention. Using both quantitative and qualitative field research data, Yao Li has been able to examine the macro picture and micro dynamics of protest cases. This well-researched book speaks to a broad range of literature in authoritarian politics and social movement. It deserves to be widely read.'

'Carefully analyzing the interaction between protesters and officials in China, Yao Li gauges the impact of different kinds of protests on regime legitimacy. Differentiating between what she calls regime engaging and regime threatening protests, she shows that - despite tumultuous change and widespread protests - the Chinese regime has remained stable because most protests have stayed on the regime-engaging side of the continuum. Her innovative framework not only helps us better understand the dynamics of protest in China and the resiliency of the Chinese regime, but it also provides a template for investigating popular political contention in other authoritarian regimes.'

'Playing by the Informal Rules makes a compelling case that protest in contemporary China is not a sign of imminent democratization, but rather of authoritarian consolidation. Drawing on impressive original data, Yao Li shows that both protesters and the regime conform to two informal rules: self-censored resistance and informal tolerance. Most protests are regime-engaging, rather than regime-threatening; and the government, despite its vast repressive capacity, systematically under-enforces the law, tolerating such protest despite its illegality. The result is to channel discontent and facilitate bargaining - not unlike social movement in Western democracies. Playing by the Informal Rules makes an important contributing to our understanding of authoritarian durability in China, highlighting its informal institutional bases. In my view, the book is a model for how to study China as an authoritarian regime, per se, rather than a would-be democracy.'

'In a remarkably wide-ranging book that examines both regime-engaging and regime-threatening protest, Yao Li reveals how informal norms shape contention and the Chinese government's response to it. In her telling, it's the unwritten rules that determine which protesters engage in self-censorship and encounter tolerance and which act in unruly ways and are subject to unlawful repression. That most norms in today's China fall on the accommodating side of the ledger offers us a fresh, new perspective on why high levels of contention and regime durability may be more compatible than is often thought.'