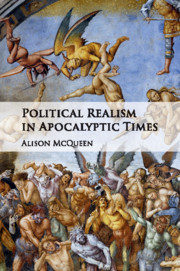 From climate change to nuclear war to the rise of demagogic populists, our world is shaped by doomsday expectations. In this path-breaking book, Alison McQueen shows why three of history's greatest political realists feared apocalyptic politics. Niccolò Machiavelli in the midst of Italy's vicious power struggles, Thomas Hobbes during England's bloody civil war, and Hans Morgenthau at the dawn of the thermonuclear age all saw the temptation to prophesy the end of days. Each engaged in subtle and surprising strategies to oppose apocalypticism, from using its own rhetoric to neutralize its worst effects to insisting on a clear-eyed, tragic acceptance of the human condition. Scholarly yet accessible, this book is at once an ambitious contribution to the history of political thought and a work that speaks to our times.

‘This is an excellent addition to the burgeoning literature on political realism. Straddling political theory and international relations (IR) in a fresh and creative fashion, McQueen offers us a strikingly original portrait of realist responses to apocalypse. Moving seamlessly from Machiavelli to Hobbes to Morgenthau, from early modern debates about the nature of God to modern fears of nuclear annihilation and catastrophic climate change, she tells a fascinating story that raises profound questions about the dangers and the possibilities of political theology. Combining acute textual interpretation, felicitous historical contextualisation, and subtle normative analysis, Political Realism in Apocalyptic Times makes a major contribution to political theory and international relations.'

‘Richard Hofstadter famously coined the term ‘the paranoid style' to describe a certain histrionic strand within American politics. In Political Realism in Apocalyptic Times, McQueen audaciously outdoes Hofstadter by demonstrating the more widely pervasive ‘apocalyptic' style characteristic not only of American political theorizing and practice but also of modern political thought more generally. McQueen shows how and explains why the rhetoric of doomsday, visions of tribulation and redemption, and 'end times' ideologies not only persist but actually pervade the supposedly secular age. She meticulously and ingeniously traces the apocalyptic quality of the contexts in which political authors/actors such as Machiavelli, Hobbes, and Morgenthau wrote, and how this apocalypticism infiltrated their writings. The book is certain to make an enormous impact in the fields of political thought, intellectual history, and American studies, especially given the now fashionable ‘theological' turn in political theory and the dramatic surge in apocalyptic politics throughout the world.'

‘Alison McQueen uses the common, apocalyptic context of their thinking to give us a novel perspective on the unlikely trio of Machiavelli, Hobbes and Morgenthau. The perspective unifies and illuminates, revealing aspects of their writings, and connections between their concerns, that are unseen in other treatments.'

‘The most important achievement of Alison McQueen's fascinating new book is that she launches an overdue conversation between and among different versions of ‘realism', past and present. Shedding fresh light on Machiavelli, Hobbes, Hans Morgenthau, and other ‘realists', McQueen ignores the usual disciplinary boundaries between and among competing realist brands. Hers is an indispensable contribution not only to a growing body of realist scholarship but to political science and philosophy.'

'The heart of the book is four case studies that attempt to contextualize the apocalyptic thinking of the Judeo-Christian tradition and the efforts to contain it by Paul and Augustine, followed by a case study each on Niccolò Machiavelli, Thomas Hobbes, and Hans Morgenthau. The strength of the book is in the detailed, well-researched reconstruction of the apocalyptic historical context that animated the thought of each, including Augustine.'

'McQueen’s interpretations are compelling, and it is no mean feat to offer fresh and original readings of such well-studied thinkers, in turn asking us to ponder more carefully what it means to be a ‘realist', and what the limits of such an outlook are. Furthermore, her identification of two main ‘realist’ responses to apocalypticism - the ‘tragic worldview’ and fighting apocalypse with apocalypse - are persuasive, both as matters of historical record and as analyses of the conceptual issues in play … The richness of this book stands beyond doubt, and deserves all of the attention it will surely garner.'

'At a time when the study of the theological underpinnings of political thought is gaining ground, Alison McQueen’s new book is good news. As McQueen reminds us, political theorists often pass over the fact that half of Hobbes’ Leviathan is a treatise on eschatology and ecclesiastical governance, or that Machiavelli concludes the Prince with a prophetic exhortation for the salvation of Italy from the ‘barbarians’ who periodically invaded it. Even a secularist like Morgenthau could not escape the allure of religious imagery in his most existentialist moments. McQueen’s fascinating book is due credit both for bringing these associations to the fore, thus joining the chorus of the ‘theological turn’ in political theory, and for forensically excavating the complex engagement of some of the doyens of realist thought with the symbolic resources provided by theological ideas and texts.'

'This is a book of many virtues. The central chapters combine the intellectual historian’s deep sensitivity to context with the political theorist’s sharp eye for conceptualizing different theoretical positions that can then be abstracted from their particular historical origins. Indeed, it is rare to read a book that combines these attributes so successfully and which answers potential objections to such an approach less by abstract methodological discussion and more by handling the texts with the care, detail and circumspection they deserve. McQueen has produced an erudite, thought-provoking and enjoyable study … a deeply impressive study of how some of the finest thinkers in the realist tradition struggled with apocalypticism in their own times, which proves to be a rewarding place to start when thinking through how we might respond to similar problems today.'

'McQueen does an excellent job at bringing together diverse thinkers and new interpretations under the aegis of the realist tradition. For those who see a sharp line between religion and politics, McQueen has offered a work that uses certain religious ideas to explain political philosophy. In fact, a fair reading of McQueen suggests that the line between religion and politics is actually quite blurry, with ideas traversing back and forth. With Political Realism in Apocalyptic Times, McQueen has done a service to the fields of international affairs, political theology, and all those interested in the use of political rhetoric.'