The Politico-Legal Dynamics of Judicial Review 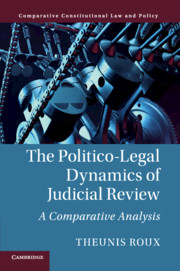 Comparative scholarship on judicial review has paid a lot of attention to the causal impact of politics on judicial decision-making. However, the slower-moving, macro-social process through which judicial review influences societal conceptions of the law/politics relation is less well understood. Drawing on the political science literature on institutional change, The Politico-Legal Dynamics of Judicial Review tests a typological theory of the evolution of judicial review regimes - complexes of legitimating ideas about the law/politics relation. The theory posits that such regimes tend to conform to one of four main types - democratic or authoritarian legalism, or democratic or authoritarian instrumentalism. Through case studies of Australia, India, and Zimbabwe, and a comparative chapter analyzing ten additional societies, the book then explores how actually-existing judicial review regimes transition between these types. This process of ideational development, Roux concludes, is distinct both from the everyday business of constitutional politics and from changes to the formal constitution.

‘Theunis Roux's The Politico-Legal Dynamics of Judicial Review develops a path-breaking theory, one which integrates legal reasoning and culture with political theories of judicial behavior. His ambitious argument offers important new insights into the dynamics of both well-studied and lesser-known legal systems.'

‘Ever since the consolidation of the study of the politics of judicial review – in the mid 1990s – scores of scholars have contributed to this field, with insightful works aiming at explaining the emergence and impact of this phenomenon. In this learned, and elegantly written book, Theunis Roux takes one step ahead through the development of an attractive typology of what he calls ‘judicial review regimes', a conceptual tool that he uses to analyze the politico-legal dynamics of this phenomenon, that is to say, the macrosocial processes that the adoption of judicial review sets in motion in both democratic and authoritarian societies. In a time when the optimism about the democratic and emancipatory impact of judicial review is under scrutiny – due to troubling developments in countries such as Hungary, Poland, and Chile – Roux's work represents an indispensable contribution.'

‘In this impressive contribution to the field of comparative constitutional studies, Theunis Roux insightfully examines the ways in which ideas about why governors are entitled to rule interact with ideas about why judges are entitled to exercise power – sometimes interlocking into stable regimes of constitutional review, and sometimes shifting incrementally or kaleidoscopically. The taxonomy Roux develops will be enormously helpful to all those interested in understanding the conditions under which liberal constitutionalism emerges and persists.'

‘A major contribution to the burgeoning field of comparative constitutional law. Roux draws on broad theoretical constructs and practical inquiries in national legal settings to address the freighted questions of what constitutional courts are supposed to do, and how likely they are to do it successfully. The result ramps up the sophistication of the field for the benefit of all participants.'

‘In his new book, Roux beats a new path for comparative studies – integrating institutional analysis with how lawyers in different systems actually think about law, politics and judicial legitimacy. This is a book we have long been waiting for, setting out an agenda for comparative constitutionalism 2.0.'

‘How do constitutional cultures evolve and change character over time? In this impressive new work, Roux explores how judicial review in democratic and authoritarian regimes both influences and is influenced by public conceptions of the law/politics relationship. The book is rich in theory, and comparative case-studies, and provides a unique framework for understanding the intersection between constitutional law and politics. It deserves a wide audience in both fields, and especially among those interested in understanding moments of constitutional change and transition worldwide.'