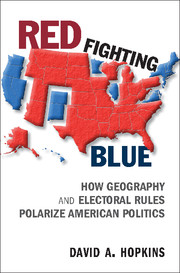 The national electoral map has split into warring regional bastions of Republican red and Democratic blue, producing a deep and enduring partisan divide in American politics. In Red Fighting Blue, David A. Hopkins places the current partisan and electoral era in historical context, explains how the increased salience of social issues since the 1980s has redefined the parties' geographic bases of support, and reveals the critical role that American political institutions play in intermediating between the behavior of citizens and the outcome of public policy-making. The widening geographic gap in voters' partisan preferences, as magnified further by winner-take-all electoral rules, has rendered most of the nation safe territory for either Democratic or Republican candidates in both presidential and congressional elections - with significant consequences for party competition, candidate strategy, and the operation of government.

'Striking maps of ‘red’ and ‘blue’ America have become a staple of political punditry, but not a foundation for deep analysis - at least until now. In this path-breaking book, David A. Hopkins offers a powerful yet subtle account of how American electoral institutions have intensified geographic divides, and how those divides in turn shape our increasingly polarized and troubled politics. Brilliant.'

'Dispelling many misconceptions, David A. Hopkins shows how the geographic basis of electoral representation in the US interacts with divisions on social issues among voters to produce the enduring red and blue map. Hopkins' assessments are consistently balanced and well-informed. He offers readers a valuable guide to the politics of these not so United States. This informative, readable book reflects the measured judgment and insights of scholarship, but the author's lucid prose is accessible to undergraduates and citizens of all stripes.'

'As political scientists and pundits alike have become, well, polarized over the causes and consequences of political polarization, Red Fighting Blue makes an important contribution to that debate. David A. Hopkins successfully makes the case that place matters in American politics - but not necessarily for the reasons you might think. It is not that Americans themselves are hopelessly divided, but that the very institutions of American government have led to regional voting blocs. Hopkins explains how and why that came to be the case. From now on, any discussion of polarization in American will need to reckon with the argument of Red Fighting Blue.'

'This is an accessible and informative study on the political geography of the nation, weaving together important insights on political polarization, partisan identification, and the stability of political preference. Professor Hopkins deploys credible evidence to support the contention that geographic differences in political party support have remained persistent in some places, while gaining in intensity in others. Those who want to dismiss regionalism in politics as a bygone feature of previous eras will need to grapple with the clear arguments made here.'

‘By taking both sides of the polarization debate seriously, Hopkins successfully reconciles the compelling evidence presented by the competing perspectives.’

'Red Fighting Blue is a valuable addition to the literature on American party politics and voting behaviour. Anyone interested in understanding American politics in the Twenty-first century will find David Hopkins’ analysis of the geographic underpinnings of our polarized politics to be extremely helpful.'

Alan I. Abramowitz Source: Congress and the Presidency