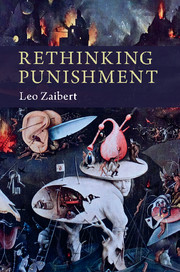 The age-old debate about what constitutes just punishment has become deadlocked. Retributivists continue to privilege desert over all else, and consequentialists continue to privilege punishment's expected positive consequences, such as deterrence or rehabilitation, over all else. In this important intervention into the debate, Leo Zaibert argues that despite some obvious differences, these traditional positions are structurally very similar, and that the deadlock between them stems from the fact they both oversimplify the problem of punishment. Proponents of these positions pay insufficient attention to the conflicts of values that punishment, even when justified, generates. Mobilizing recent developments in moral philosophy, Zaibert offers a properly pluralistic justification of punishment that is necessarily more complex than its traditional counterparts. An understanding of this complexity should promote a more cautious approach to inflicting punishment on individual wrongdoers and to developing punitive policies and institutions.

'In his new book, Leo Zaibert has created a formidable challenge to philosophers who think that punishment can only be another word for certain kinds of crime or suffering prevention, and that the notion of deserved suffering does not make philosophical sense. The book is a must-read for all who think that the idea of justified retributive punishment excludes forgiveness and implies some kind of an eye-for-an-eye punishment. The book defends G. E. Moore’s famous notion of organic whole, and is itself a very good example of one.'

'A wonderfully ambitious and passionate book by one of the most original and incisive scholars working at the intersection of philosophy and criminal law, in the great tradition of Luis Jiménez de Asúa.'

Markus D. Dubber - Director of the Centre for Ethics, University of Toronto

'Many retributivists take it as a given that it is intrinsically good to give people what they deserve. Leo Zaibert’s book offers a thorough and refreshing defense of that assumption. Zaibert thus provides the philosophical bedrock on which most theorists have been standing upon all along.'

'Zaibert introduces a novel perspective for thinking about traditional problems in attempts to justify punishment. Moral and legal philosophers who despair that we are stuck at an impasse and that nothing new and important remains to be said should put Rethinking Punishment at the top of their pile.'

'I think the books in the field I read are usually intelligent, sometimes sophisticated, but seldom, if ever, is their central insight profound (if true). I think the central insight Zaibert offers - punishment ends moral innocence - really is quite profound.'

'Every so often a book is published within a particular area of philosophy that challenges the prevailing orthodoxy and opens up new vistas for exploring and deepening our understanding. Leo Zaibert’s excellent Rethinking Punishment does just this. This outstanding book shakes up conventional punishment theory and calls it out for its simplistic presuppositions given our immensely complex moral reality. The book provides a clear and nuanced way forward for theories of punishment, and in doing so makes a significant, important, and lasting contribution to moral theory in general. We are in his debt.'

'Rethinking Punishment has many virtues and defends its key propositions with admirable clarity, insight, and erudition. The book is more than just another book about punishment theory ...'

‘Leo Zaibert’s Rethinking Punishment … is a rigorous, subtle, and penetrating analysis of the issues surrounding punishment; and it is a profoundly philosophical work that exhibits careful and well-informed philosophical argument at its best … By my lights it is the most impressive and sophisticated and appealing defense of retributivism yet developed.’