How Abortion Transformed the Culture Wars 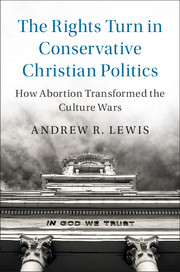 The Rights Turn in Conservative Christian Politics documents a recent, fundamental change in American politics with the waning of Christian America. Rather than conservatives emphasizing morality and liberals emphasizing rights, both sides now wield rights arguments as potent weapons to win political and legal battles and build grassroots support. Lewis documents this change on the right, focusing primarily on evangelical politics. Using extensive historical and survey data that compares evangelical advocacy and evangelical public opinion, Lewis explains how the prototypical culture war issue - abortion - motivated the conservative rights turn over the past half century, serving as a springboard for rights learning and increased conservative advocacy in other arenas. Challenging the way we think about the culture wars, Lewis documents how rights claims are used to thwart liberal rights claims, as well as to provide protection for evangelicals, whose cultural positions are increasingly in the minority; they have also allowed evangelical elites to justify controversial advocacy positions to their base and to engage more easily in broad rights claiming in new or expanded political arenas, from health care to capital punishment.

'Andrew R. Lewis has provided an excellent analysis which bridges the gaps between several subfields of political science. This work is empirically sophisticated, theoretically nuanced, and addresses important questions in normative democratic theory. As a study of the interplay of public opinion, public policy, and public discourse, this fine book will serve as an exemplar.'

As Andrew R. Lewis incisively argues, the rise of 'rights talk' among conservative evangelical Christians has profoundly shaped the American political landscape. If you want to understand the future of cultural politics in America, read this book. No longer do evangelicals claim to speak for a moral majority; instead, they seek the protection of their rights as an embattled minority. This insight - masterfully chronicled and convincingly argued - is like a Rosetta Stone for contemporary cultural politics. It illuminates everything from the ongoing debate over so-called 'religious freedom' statutes to why evangelicals supported Donald Trump.'

'In The Rights Turn in Conservative Christina Politics, Lewis engages in social theorizing in grand style, charting the dramatic shift in evangelical advocacy motivated by abortion politics and a new minority status. Evangelicals learned about rights politics, began making rights claims, and found themselves extending rights claims to other issues and groups. Lewis’ fascinating book transforms the usual culture war narrative to one both more important and more American, as Constitutional pluralism bends groups’ commitments to its ineluctable logic.'

'In light of the religious Right’s failure to win any lasting victories, one may be tempted to understate the movement’s overall importance to contemporary politics. To counter this temptation, one should read Andrew R. Lewis’ fantastic new book, The Rights Turn in Conservative Christian Politics, which demonstrates the profound impact that the Christian Right, despite its many defeats, has had on American political life. … The Rights Turn is an impressive work of social science.'

'This compelling and well-documented volume will be of value to anyone seeking to understand what has happened with the dramatic changes that have occurred within the culture wars in America. There has been a major shift in how conservatives have pitched their message and supported their position in major battlefronts in the culture wars. … Lewis documents with considerable detail major historical milestones as this shift has occurred, presenting little known and unappreciated information on how specific institutional structures within the evangelical community have developed evolving positions on issues such as abortion and gay rights.'

'Lewis convincingly documents an important shift among American Evangelicals … This important new book is essential for understanding the still-evolving role of Evangelicals in American politics.'

'Lewis’s work contributes much to a collective understanding of how religion participates on the political landscape.'