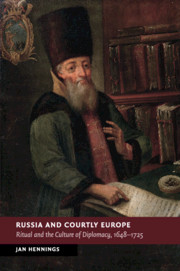 In this book on early modern diplomacy, Jan Hennings explores the relationship between European powers and Russia beyond the conventional East-West divide from the Peace of Westphalia to the reign of Peter the Great. He examines how, at a moment of new departure in both Europe and Russia, the norms shaping diplomatic practice emerged from the complex relations and direct encounters within the world of princely courts rather than from incompatible political cultures. He makes clear the connections between dynastic representation, politics and foreign relations, and shows that Russia, despite its perceived isolation and cultural distinctiveness, participated in the developments and transformations that were taking place more broadly in diplomacy. The central themes of this study are the interlocking manifestations of social hierarchy, monarchical honour and sovereign status in both text and ritual. Related issues of diplomatic customs, institutional structures, personnel, negotiation practice, international law, and the question of cultural transfer also figure prominently.

'Forces a reconsideration of long-established assumptions. There have been few more impressive scholarly débuts than this dazzling study.'

'This impressive debut monograph by Jan Hennings examines Russia’s position and activity in the European diplomatic sphere between the Peace of Westphalia and the death of Peter I. … It will be a stimulating and informative work for any scholar who has an interest in early modern history, whether of Europe or Russia, or in diplomacy more generally. On a technical level, the publisher is to be commended for providing high-quality reproductions of images and archival texts, which provide useful illustrations to support the argument.'

'This cogent book is about more than diplomacy; it gets to the heart of debates about Russia’s image and place in Europe.'

'Jan Hennings has produced a fascinating and well-researched study of Muscovite and Petrine diplomacy that places Russian foreign policy in the context of European baroque culture. … Russia and Courtly Europe is a superb study that every historian of Muscovite and Imperial Russian history will want to read.'

'Hennings's Russia and Courtly Europe makes a fundamental contribution to the history of diplomacy … Hennings has written a monograph rich in new insights. It is a great example of how the study of symbolic communication can renew diplomatic history.'

'Narrow channels of communication, sharply prescribed forms and genres of reporting, and restrictive rules about what diplomats could and could not do in particular situations all lent Muscovite interactions a distinctive flavor, but did not set it far apart from its contemporaries. Hennings manages not only to present this information with verve and clarity, but also to inflect itconsistently with his important argument about Russia’s participation in a shared field of court ceremony and the high stakes involved in succeeding in that arena … Based on research in archives in Russia, Austria, France, and Britain, using both visual and textual sources, and built on wide-ranging erudition, Russia and Courtly Europe sheds truly new light on a much-studied era.'

'Hennings’s vision of Russia as part of a larger continuum of diplomatic practice, rather than as an unusual, curious, peculiar, barbaric outlier, and of the reign of Peter the Great as one of part of an ongoing process of adaptation, is largely convincing.'