Home
A Secular Age beyond the West

A Secular Age beyond the West

Religion, Law and the State in Asia, the Middle East and North Africa 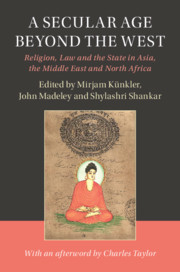 This book traces religion and secularity in eleven countries not shaped by Western Christianity (Japan, China, Indonesia, India, Pakistan, Iran, Russia, Turkey, Israel, Egypt, and Morocco), and how they parallel or diverge from Charles Taylor's grand narrative of the North Atlantic world, A Secular Age (2007). In all eleven cases, the state - enhanced by post-colonial and post-imperial legacies - highly determines religious experience, by variably regulating religious belief, practice, property, education and/or law. Taylor's core condition of secularity - namely, legal permissibility and social acceptance of open religious unbelief (Secularity III) - is largely absent in these societies. The areas affected by state regulation, however, differ greatly. In India, Israel and most Muslim countries, questions of religious law are central to state regulation. But it is religious education and organization in China, and church property and public practice in Russia that bear the brunt. This book explains these differences using the concept of 'differential burdening'.

‘With much learning, empirical range, and analytical acuity, this rich consideration of religion's qualities and effects profoundly extends Charles Taylor's influential scholarship on the origins and character of modern secularity in the West. Placing decisions by states across the globe at the center of the often surprising formations that constitute modernity, the volume's essays powerfully show how religious institutions and faith shape the public sphere, and illuminate how systems of belief, law, and participation orient national practices and identities. Must read!'

‘This collection of studies is a remarkably important contribution to understanding the ways in which Charles Taylor's delineation of the emergence of a secular age is, or is not, replicated in non-Western areas of the world.'

'The West pioneered and to a large extent institutionalized a distinction between secular and more religious or sacred affairs. This has influenced the rest of the world, but also taken on different character in different settings, shaped by both innovations and different histories. This outstanding book is the best source for appreciating both the diversity of secularisms and the ways they all inform what Charles Taylor identified as our secular age.'

'The book ambitiously and innovatively recasts Charles Taylor’s classic account of the secularization of the conditions of belief in the modern North Atlantic in a near-global perspective. State power was crucial to realize elite initiatives at critical junctures to reduce religion’s public roles in societies where these efforts did not draw broad support. But the authors find that state-led transformative projects made religious belonging crucial to citizenship in ways that hindered the secularization of the conditions of belief in most Asian, East European, and North African societies. Comprehensively comparative analyses of forms of secularity, we learn, should focus on how state regulation crucially determines religion’s influence over political authority and public life, and thus the feasibility of unbelief. Combining the fine-grained and contextually sensitive approaches of area specialists with an overarching and coherent conceptual vision, this fine volume advances the cutting edge of multi-disciplinary research on global secularities and public religion and should become a major reference work.'

'This is a timely set of interventions for an age where the very fabric of the state vis-a-vis religion, 'God' and secularism is becoming central in debates not only within the academic community but well-beyond - among politicians and political parties, and now even inside the spaces of foreign and international development policy. This book lays out an important analytical and practical approach to understanding the complexities of competing narratives by means of close factual analysis of particular cases and comparison between them. This is a necessary read in today's times.'

'A strong, well-argued book at the heart of current local and global debates on the relationship between state and religion. Altogether, the chapters make a remarkably coherent whole where the meeting of sociological concepts and grounded realities unfolds in a flow that gives meaning to our deepest concerns. This is a most welcome book in a troubled era that needs global solutions for globally-created dilemmas.'

'This edited volume is extraordinarily well researched, coherent and inspiring, and it is therefore probably the best contribution to this body of scholarly work so far. … It thoroughly engages with the question of what the 'secular' could mean and look like outside the Christian world where it was always a cognate term of the (Christian) notion of religion; it identifies institutional configurations, critical junctures and pathway dependencies of secularity in the areas under study; and it explores the question of how legal and political regulations of religion and 'conditions of belief', e.g. the forms and possibilities of worldview pluralism, are related to one another. … this book is a monumental accomplishment and highly recommended to students of law, secularism, globalization, and transregional sociology.'

‘This is a book to be read, marked and inwardly digested. It is not to be rushed. There is a huge amount to take in over a wide canvas of ideas as well as places. Persevering readers will be richly rewarded for their efforts, for which reason I recommend it very warmly.’

“If you read one new book on secularization this year, it should be A Secular Age beyond the West. Mirjam Künkler, John Madeley, and Shylashri Shankar have compiled a marvellously coherent collection of essays that breaks important new ground in the comparative study of secularization. The strengths of this collection are many. Each chapter, on its own, is rich and suggestive. Yet the volume is more than the sum of its parts. It is rare that an edited volume displays such terrific thematic unity across the chapters.'

‘The accomplishment of A Secular Age Beyond the West is difficult to overstate, especially given the immensity of the project undertaken. The amalgamation of conceptual and empirical rigor, geographical reach, and historical sensitivity the book offers is unmatched in the latest generation of scholarship on secularization … The book’s comparative-historical methodology should be underlined as a major contribution to the prospect of an emergent field of global secularity studies. While anthropologies of secularism (Cannell, 2010) tend to emphasize the uniqueness and incommensurability of each country/tradition, A Secular Age Beyond the West works consciously towards developing a common vocabulary for cross-religious and cross-regional comparisons, seeking to overcome an essentialized ‘West and the Rest’ distinction.’