Home
The Security Arena in Africa

The Security Arena in Africa 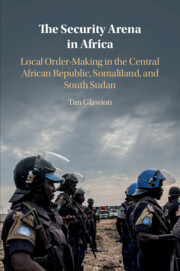 The labels 'state fragility' and 'civil war' suggest that security within several African countries has broken down. As Tim Glawion observes, however, while people do experience insecurity in some parts of conflict-affected countries, in other areas they live in relative security. Conducting in-depth field-research between 2014 and 2018, The Security Arena in Africa is based on first-hand insights into South Sudan and the Central African Republic during their ongoing civil wars, and Somalia's breakaway state of Somaliland. Gaining valuable accounts from the people whose security is at stake, this bottom-up perspective on discussions of peace and security tells vivid stories from the field to explore complex security dynamics, making theoretical insights translatable to real-world experiences and revealing how security is created and undermined in these fragile states.

'Based on impressive fieldwork, this book explores the dynamics of security and order at the sub-state level. It shows how local, national and international actors meddle, compete and complement one another in the security arenas found in small towns in Africa's conflict-affected countries, and what this means for the inhabitants' perceptions of security. It is essential reading for anyone interested in comparative security studies.'

'Concepts like state failure, security, and order are ubiquitous yet remain opaque. Tim Glawion lifts the hood to reveal tremendous variation ranging from state repression all the way to creative non-state security provision. By approaching security from the bottom up, he enriches our conceptual toolbox and contributes to our substantive understanding.'

‘One important feature of this book is that the discussions presented almost entirely rely on Glawion’s direct engagement with everyday people whose security is often compromised. This bottom-up approach lends itself well to the topic at a time when most publications are a result of scholars’ privileged macro-level discussions with state officials on security matters. This provides insight into the often neglected ‘local cleavages’. The book also displays impressive field observations conducted over four years in nine locations within CAR, Somaliland and South Sudan. This relatively broad country coverage allows Glawion to examine why there is more security in some arenas than in others, despite sharing remarkably similar patterns of ordering. It is also important to note that these countries are not easily accessible in terms of field research. Finally, the book’s structure and language allow for easy readership and engagement with the arguments presented throughout.’

‘… this is an extremely interesting and well-written book …’

‘The Security Arena in Africa is a refreshingly honest and contemplative work in terms of its voice. Glawion is candid and straightforward in his outlining of the methodological challenges and trade-offs faced in undertaking the fieldwork. Thus, he study represents, in this regard, a valuable contribution to the burgeoning literature on the politics and ethics of research in conflict-affected regions …'