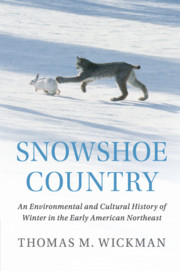 Snowshoe Country is an environmental and cultural history of winter in the colonial Northeast, closely examining indigenous and settler knowledge of snow, ice, and life in the cold. Indigenous communities in this region were more knowledgeable about the cold than European newcomers from temperate climates, and English settlers were especially slow to adapt. To keep surviving the winter year after year and decade after decade, English colonists relied on Native assistance, borrowed indigenous winter knowledge, and followed seasonal diplomatic protocols to ensure stable relations with tribal leaders. Thomas M. Wickman explores how fluctuations in winter weather and the halting exchange of winter knowledge both inhibited and facilitated English colonialism from the 1620s to the early 1700s. As their winter survival strategies improved, due to skills and technologies appropriated from Natives, colonial leaders were able to impose a new political ecology in the greater Northeast, projecting year-round authority over indigenous lands.

'By contrasting the experiences of the Wabanaki people and their English invaders during a time of climate change, Thomas M. Wickman beautifully demonstrates that climate history may be very instructive for us, even as he makes clear that, in the context of settler colonialism (then or now), 'us' is a complicated if not contested category.'

'Wabnakis and English lived in a world where the snowshoe was as important as the plough. As Thomas M. Wickman reveals in this pathbreaking book, snow and cold mattered in ways that historians have forgotten or ignored. Not since William Cronon’s Changes in the Land have we had such a subtle study of humans and environment in the northeast. Winter has arrived in the history of early New England.'

'Snowshoe Country restores vital Northeastern winter lands to the center of Indigenous history, settler colonialism, and environmental studies of New England. Thomas M. Wickman elucidates complex winter ecologies and adaptations, delving deeply into a diverse documentary record, the archive of Indigenous winter knowledge and technologies, and enduring literatures of survivance. A must read for anyone interested in colonial American history or climate change.'

'Wickman describes how early colonists learned to use snowshoes in deep drifts that stopped horses only after they realized that ignorance of their use gave Native peoples a decided military advantage. … Ice and snow were not regarded as a nuisance by the Abenakis and other Native peoples but as an integral part of cultural identity; for them, training in the manufacture and use of snowshoes began at an early age. Wickman describes how command of snowshoes allowed the Abanakis to make winter, with its snows that could reach a depth of three feet, a ‘season of power’ until English adaptation of snowshoes around 1700 nullified that advantage. Intricately woven, intensively researched, and well written, Wickman’s account sets a high bar for history that illustrates the formative role that weather and climate play in human events. Highly recommended.'

'… Thomas M. Wickman’s Snowshoe Country is an elegant, well-researched monograph … is impressively researched, with extensive use of English, French, and Native American sources. This is a welcome addition to the growing corpus of scholarship on the environmental history of early America.'

'… this is a very interesting and enlightening addition to the studies of colonial New England, and well worth the time to read and enjoy.'

'[Wickman’s] thoughtful and grave engagement with the paramount issue of our time is profoundly admirable. Snowshoe Country will provoke readers to look at the winter with new concern - and respect.'

'Wickman draws from a wide range of scholarship in the environmental humanities, postcolonial literary criticism, historical linguistics, and indigenous theory. He deftly integrates material evidence … with his interpretation of such textual sources as colonial records, captivity narratives of hypothermia and frostbite, dictionaries, oral history, and poetry. As a result, he offers bracing reappraisals of the Pequot War (Chapter 2), King Philip’s War (Chapter 3), and the four Anglo-Wabanaki Wars (Chapters 5 and 6).'

‘… Wickman has written a well-organized and imaginative book.’