A Genealogy of a Concept since 1840 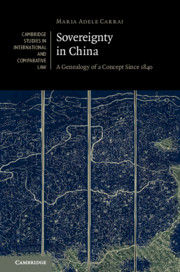 'The Confucian admonition that one needs to study the past to understand the present is especially apt when it comes to China and sovereignty. Fortunately, Dr Maria Adele Carrai’s new book provides a superb genealogy of Chinese approaches to sovereignty over time, from historic times to the present, that will be a key departure point on this important topic for years to come.'

'Carrai’s innovative conceptual history of ‘sovereignty’ in China explores the changing meanings of international law and its structures of authority and legitimacy through three periods of dramatic Chinese political transition. This is a study not only of Chinese reception and adaptation. It provides a foundation for scrutiny of China’s active participation in shaping our present international legal order.'

'This is a stimulating, learned, and readable analysis of the many uses the malleable concept of ‘sovereignty’ has served in China’s relations with the world for almost two centuries. It offers invaluable assistance for parsing the rhetoric of both Xi Jinping and Donald Trump in the current East-West contest for domination.'

'This study provides a much-needed concise history of the genealogy of sovereignty as a central concept of modern international law and politics in the context of Chinese transformation and Sino-foreign encounters since the mid nineteenth century. Its nuanced analysis of Chinese specificity and agency in shaping international legal and political history will be of great interest to scholars of China, comparative politics, and international history.'

'Sovereignty occupies the conceptual heart of the Chinese Communist Party’s bid to claim for China its rightful place in the world and to justify its international policies. By showing how this concept emerged and what it means today, Carrai sets out the rhetorical terrain across which those who wish to enter into conversation with official China will have to make their way.'

‘Overall, this book is no doubt an exciting work that fills a gap and connects the dots. It situates the history of international law in a global perspective, interrogating the widely held belief of international law as a universal order and explores the ways in which its history is closely anchored to European experience. Besides, the book demonstrates how encounters with non-European realities have influenced international law’s formation. Given that scholarly pursuit in clarifying international law concepts continues to be one of the dominant interests in legal studies and political science, the book serves as a useful reference for scholars, researchers, graduate students, and whoever might take an interest in these fields of study. Sovereignty in China will be a key departure point on this important topic for years to come.’

‘In Sovereignty in China, Maria Adele Carrai traces the history of China’s reception of the concept of sovereignty in international law since it was introduced into China more than 190 years ago. This well-researched and stylishly presented work charters the historical development and the changing meanings of a transplanted concept in a foreign soil far away from its birthplace. Carrai persuasively argues that the meaning and scope of a concept can grow independent of its origin and interact with the environment it finds itself in, thus acquiring a new life of its own.’

‘This well-researched and stylishly presented work charters the historical development and the changing meanings of a transplanted concept in a foreign soil far away from its birthplace. Carrai persuasively argues that the meaning and scope of a concept can grow independent of its origin and interact with the environment it finds itself in, thus acquiring a new life of its own … This book has contributed to our appreciation of China’s international community engagement and international law, not only of the historical transformations that have taken place, but also in terms of understanding the present-day Chinese mentality.’