Home
The Stupidity of War

The Stupidity of War 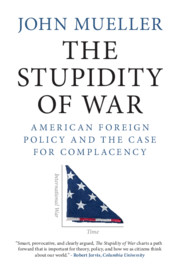 It could be said that American foreign policy since 1945 has been one long miscue; most international threats - including during the Cold War - have been substantially exaggerated. The result has been agony and bloviation, unnecessary and costly military interventions that have mostly failed. A policy of complacency and appeasement likely would have worked better. In this highly readable book, John Mueller argues with wisdom and wit rather than ideology and hyperbole that aversion to international war has had considerable consequences. There has seldom been significant danger of major war. Nuclear weapons, international institutions, and America's super power role have been substantially irrelevant; post-Cold War policy has been animated more by vast proclamation and half-vast execution than by the appeals of liberal hegemony; and post-9/11 concerns about international terrorism and nuclear proliferation have been overwrought and often destructive. Meanwhile, threats from Russia, China, Iran, and North Korea, or from cyber technology are limited and manageable. Unlikely to charm Washington, Mueller explains how, when international war is in decline, complacency and appeasement become viable diplomatic devices and a large military is scarcely required.

'Smart, provocative, and clearly argued, The Stupidity of War charts a path forward that is important for theory, policy, and how we as citizens think about our world.'

'Unfailingly incisive, witty, original, prescient, and constructively contrarian. True to form, this case for complacency will shake you out of your complacency on American military policy.'

'John Mueller is incapable of writing a boring sentence. a thought-provoking, brilliant, funny and iconoclastic work. It would be very difficult for even the most hardened foreign policy professionals to read it and come away with their basic assumptions intact.'

'Mueller makes a convincing case that our rivals are far less formidable that we imagine – and that, in fact, the 21st century has brought a worldwide understanding of the folly of war that should reshape how governments and citizens think about national security.'

'Mueller challenges and dazzles with his acute vision and acid assessment of conventional national security wisdom. He documents a history of US post-world War II threat inflation, gives US wars a failing grade, and questions most authority. All the while weaving in movie, musical, and literary references.'

'John Mueller has launched a characteristically bold and sweeping assault on the key tenets of American national security policy. Even readers who do not agree will be challenged by a well-crafted and thoroughly documented argument.'

'John Mueller once again unsheathes his pen to puncture the Washington threat consensus.'

'In this book, John Mueller makes the bold argument that a culture of peace - not institutions, democracy, or American leadership - is the source of peace since World War II. He goes on to recite and refute historical examples of alarmist rhetoric about potential threats that proved to be exaggerated.'

'Mueller’s account of a rising aversion to international war since 1945 provides a timely rejoinder to ominous predictions of war.'

'[Mueller's] arguments are important and deserve a wide hearing, especially at the start of the Biden administration, when it feels as if the world is entering a new era and the future direction of U.S. foreign policy seems up for grabs. Books like Mueller’s should help inform the debate.'

'The Stupidity of War makes for bracing reading, and it will force readers from all foreign policy camps to reconsider what they think they know about the history of U.S. foreign policy.'

'Mueller is a provocative and original thinker … His latest book synthesizes decades of work and marshals reams of historical evidence to chronicle a litany of mistakes abroad - from the Vietnam War to the invasion of Iraq - that add up to an unflinching indictment of U.S. foreign policy since 1945.'

‘… Mueller has written a compelling and provocative book that challenges deeply held beliefs of many U.S. policy makers and international relations theorists. His book should be widely read by scholars and practitioners alike.’