Tax Credits for the Working Poor

A Call for Reform 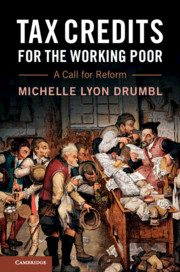 The United States introduced the earned income tax credit (EITC) in 1975, where it remains the most significant earnings-based refundable credit in the Internal Revenue Code. While the United States was the first country to use its domestic revenue system to deliver and administer social welfare benefits to lower-income individuals or families, a number of other countries, including New Zealand and Canada, have experimented with or incorporated similar credits into their tax systems. In this work, Michelle Lyon Drumbl, drawing on her extensive advocacy experience representing low-income taxpayers in EITC audits, analyzes the effectiveness of the EITC in the United States and offers suggestions for how it can be improved. This timely book should be read by anyone interested in how the EITC can be reimagined to better serve the working poor and, more generally, whether the tax system can promote social justice.

‘From the unique lens of a tax justice warrior working on the frontlines fighting poverty, Michelle Lyon Drumbl details the troubled history of US refundable tax credits and compares similar international programs to reimagine relief for America's vulnerable working families. A must read for anyone engaged in critical rethinking of economic justice policies.'

‘Michelle Lyon Drumbl draws on a wide range of resources – including the history of the EITC, studies about its impact, the experience of other countries with similar programs, and her years representing taxpayers in EITC disputes with the IRS – in making a number of thoughtful proposals for improving the design and administration of the EITC. This book is a must-read for anyone interested in the future of federal antipoverty policy in the United States.'

‘If one were to read only a single work on tax credits for the working poor, this should be that work. This monograph has the necessary scope, detail, and imaginative law reform solutions to make a significant contribution to the literature.’

‘The comprehensiveness of Drumbl’s treatment alone makes this book a valuable addition to the tax policy literature. She offers plenty of statistics; a thorough survey of pros, cons, and policy alternatives; and a wonderful synthesis of existing scholarship. But the book’s true strength is the human story that it tells. Too often, discussions of the EITC and CTC focus wonkishly on economic efficiency, comparisons of bureaucratic expertise, and statistics alone. Drumbl’s account does not neglect that side of the equation. But she also draws upon her experience running a low-income taxpayer clinic to tell the stories of EITC and CTC beneficiaries, who often suffer the downside consequences of relying on tax officials to administer social welfare programs on the cheap … everyone who is interested in tax policy and antipoverty programs should read this carefully-researched and thoughtfully-developed book.’

‘Drumbl makes an important contribution to the EITC literature. She clearly summarizes much of the literature from diverse disciplines on the function and effectiveness of the EITC. She uses that literature to probe the problems of the EITC and to make measured and sensible proposals for reform. In doing so, she also makes important original contributions to the comparative study of government assistance programs, drawing on the experiences of two of our closest allies, Canada and New Zealand, to support her reform proposals. As such, her work should be read by policymakers and scholars from a political and ideological viewpoints for its important discussions on the problems with the EITC and sensible proposals to address those problems. If politicians institute one or more of its suggested reforms, some financial relief will come to those taxpayers who need it most.’