From Social Democracy to Market Liberalism through an English New Town 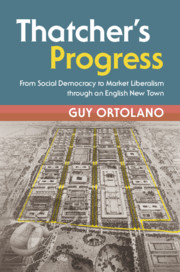 During the quarter of a century after the Second World War, the United Kingdom designated thirty-two new towns across England, Scotland, Wales, and Northern Ireland. Why, even before selling council houses or denationalising public industries, did Margaret Thatcher's government begin to privatise these new towns? By examining the most ambitious of these projects, Milton Keynes, Guy Ortolano recasts our understanding of British social democracy, arguing that the new towns comprised the spatial dimension of the welfare state. Following the Prime Minister's progress on a tour through Milton Keynes on 25 September 1979, Ortolano alights at successive stops to examine the broader histories of urban planning, modernist architecture, community development, international consulting, and municipal housing. Thatcher's journey reveals a dynamic social democracy during its decade of crisis, while also showing how public sector actors begrudgingly accommodated the alternative priorities of market liberalism.

'Modern British political history is coming to be written through urban history. With great deftness, and a nice sense of irony, Guy Ortolano tracks the transition from social democracy to neo-liberalism through the history of Milton Keynes. The result is a significant new study of the continuities as well as the changes in ‘Thatcherism’.'

'A fascinating account of the spatial politics of the British new towns program. Ortolano’s lively history of Milton Keynes illuminates the rise and fall of British social democracy and the legacy of postwar urban planning. Thatcher’s Progress is a masterly portrait of an iconic urban place. Elegantly written and a trailblazing interpretive frame makes this an instant classic in urban history.'

'Rectifying decades of denigration, Thatcher’s Progress is a story of unintended consequences, unrealised futures, and historical change from the perspective of history’s losers, charting the complex relationship between the two rival ideological formations that dominated the latter half of the twentieth century.'

'[A] wide-ranging, elegantly written, deeply serious, forcefully argued book, with an impressive command of multiple historiographies … It should become a model for writing histories that provide inventive answers to intellectually ambitious questions …'

‘… Ortolano’s new book is an insightful approach for those interested not only in British and urban history, but also in terms of revealing the dynamic and shifting nature of ideologies from a historical perspective.’

‘… Thatcher’s Progress will be essential reading for a diverse range of scholars - from those interested in the history of urban space, architecture, and housing to those concerned with questions of identity, transnational intellectual politics, or the legacies of empire - and its approach will encourage every historian of postwar Britain to reconsider linear narratives which flatten social democracy’s vibrant history.’

'… Ortolano situates a seemingly provincial moment of British planning in a distinctly global context … In Thatcher’s Progress, Ortolano has produced one of the stand-out studies of urban history in the last few years. This is precise, stimulating material that showcases the characteristic thoughtfulness and precision of the author’s work … This book deserves to be read widely and will likely find a market beyond the academy …'