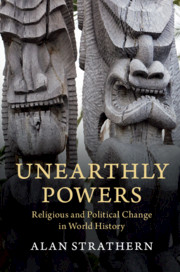 Why was religion so important for rulers in the pre-modern world? And how did the world come to be dominated by just a handful of religious traditions, especially Christianity, Islam, and Buddhism? Drawing on sociology and anthropology, as well as a huge range of historical literature from all regions and periods of world history, Alan Strathern sets out a new way of thinking about transformations in the fundamental nature of religion and its interaction with political authority. His analysis distinguishes between two quite different forms of religiosity - immanentism, which focused on worldly assistance, and transcendentalism, which centred on salvation from the human condition - and shows how their interaction shaped the course of history. Taking examples drawn from Ancient Rome to the Incas or nineteenth-century Tahiti, a host of phenomena, including sacred kingship, millenarianism, state-church struggles, reformations, iconoclasm, and, above all, conversion are revealed in a new light.

'As an extraordinarily original, articulate analysis of the relation between religious thought and political power during some three thousand years, this is a tour de force that bears comparison to some of Max Weber's classic writings. Strathern's combination of theoretical sophistication, intellectual ambition, and elegant writing has no contemporary rival.'

‘This ambitious and highly sophisticated work of comparative history offers a wide-ranging exploration of the relationship between religion and politics in the pre-modern world. It seeks to uncover the logic underlying the way in which traditional sacred kingship responded, by means of ruler conversion, to the spread of transcendentalist religions like Buddhism, Christianity and Islam. This is an important and richly rewarding book.'

‘Unearthly Powers is a magisterial and masterful study. By combining a sweeping historical vision with a sharp anthropological lens, Strathern provides a comprehensive framework to explore the dilemmas of religion and politics - god and king - that continue to animate humanity.'

A. Azfar Moin - University of Texas

‘Karl Jasper's powerful notion of ‘transcendence' in the Axial Age has provoked scholars and thinkers over several generations. Strathern subjects the idea to new scrutiny exploring how this invisible source of such immense historical power came to dominate the pre-modern world by its management of immanentist religion and political power.'

‘This book will be a required reading for any historian of religion and a milestone in the development of the field of global religious history. It is the product of mature and wide-ranging scholarship, displaying an extraordinary breadth of knowledge of scholarly literature and historical detail relating to disparate cultural regions around the world. To read this book is to embark on both a global and an intellectual journey with multiple engaging destinations. It is well worth the ride.’

‘The book is widely researched and lucidly written … particular interest to scholars and students of public theology.’