The Function and Credibility of Institutions 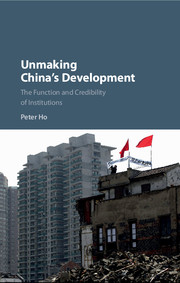 Why would the removal of authoritarian institutions in some developing countries lead to sustained socio-economic crisis, while others experience explosive growth despite 'persisting' informal, insecure and rent-seeking institutional arrangements? A key to solving this enigma lies in understanding China, a country where the paradoxes of development are highly visible. Peter Ho argues that understanding China's economy necessitates an analytical refocusing from Form to Function, detached from normative assumptions about institutional appearance and developing instead a 'Credibility Thesis'. In this reading, once institutions endogenously emerge and persist through actors' conflicting interactions, they are credible. Ho develops this idea theoretically, methodologically, and empirically by examining institutions around the sector that propelled, yet, simultaneously destabilizes development: real estate - land, housing and natural resources. Ho shows how this sector can further both our understanding of institutions and issues of capital, labor, infrastructure and technology.

‘Successful development on the ground often confounds formal development theory. This is especially the case with neo-liberal views that secure property rights are crucial for successful outcomes. Peter Ho challenges this view with his important study of land in China in all its forms, uses and abuses. Despite the absence of the necessary infrastructure proposed by neo-liberal theories, China has witnessed dramatic growth, while other nations that have this infrastructure have faltered or failed to produce the expected outcomes. Ho's detailed study … provides the reader with a wealth of stimulating challenges. Ho suggests that we concentrate on the function of institutions (their credibility) rather than the form. This is an important book that challenges many commonly held assumptions about what works in development. It should be read not only by those interested in China's economic trajectory but also by anyone interested in development theory and the reality of development in real places and in real time.'

‘Mainstream economics is of little use in understanding China's economic transitions since the late 1980s. … Peter Ho is one of very few scholars capable of explaining the Chinese economy as it is rather than as western economists imagine – or wish – it to be. We have here a profound blending of conceptual clarity and empirical detail. Attention must be paid to this message.'

‘Ho makes a bold argument that the key to understanding the Chinese developmental enigma lies in the distinction between form and function of institutions and the credibility of institutions … The ‘Credibility Thesis' effectively articulated here is inspirational, innovative, and provocative with great potentials to advance theoretical inquiry into the intriguing nature of China's developmental model in a rapidly changing world.'

‘Peter Ho … raises a profound question about the ‘credibility' of land institution. In Unmaking China's Development, he investigates actually-existing messy land property rights in rural and urban China. The book not only illuminates complex land and housing issues but also provides highly insightful reflections on economic theories of property rights.'

‘Peter Ho is a leading theorist of China's contemporary property rights. Based on rich empirical data and rigorous theoretical framing, this book successfully delineates the transformation and consolidation of China's land rights regimes in the past half a century, and offers new insight that convincingly defies existing explanatory models.'

‘Academics and activists interested in and working on the broad themes of politics and development, rural and urban issues in various parts of the world must read Unmaking China's Development by Peter Ho. It is a brilliant book that looks into the centrality of institutions in political and development processes, and successfully poses a highly original theoretical and methodological approach for the standard narratives on this subject.'

‘Peter Ho has long been recognized among scholars as the leading authority on Chinese land issues. In this conceptually sophisticated book he explores both the urban and rural institutional underpinnings of landholdings and examines a conundrum: why China has experienced high levels of investment in property despite a system of insecure property rights. His book not only illuminates China's economic development but also successfully challenges long-held neo-liberal assumptions in the social sciences.'

‘Focused on the vicissitudes of real estate institutions, Peter Ho's new book offers us a penetrating book into the political economy of Chinese development and raises profound questions about the politics of development in general. This is a book brimming with insights and provocations.'

‘This is an excellent scholarly work. It combines a wide-ranging literature search with detailed fieldwork in China … in an attempt to answer broad theoretical questions. The empirical work and theoretical underpinnings are astoundingly detailed.'

‘This is an important book on many dimensions. Peter Ho draws on his extensive empirical research in China to construct a convincing and highly original theory challenging the basic neo-liberal assumption that clear, formal property rights are a necessary precondition for development. Ho points out that the fifth of the world's population living in China experienced the largest economic boom in history with murky and ambiguous ownership rules. He argues that persistence of institutions shows they perform useful functions and are credible. … Ho's conclusions call into question the many costly efforts by international organizations and national governments (including China) to clarify ownership rules. They demand a new, more culturally sensitive approach to harmonizing informal belief systems and ambiguous, but credible, property rights systems.'