Home
The Use of Armed Force in Occupied Territory

The Use of Armed Force in Occupied Territory 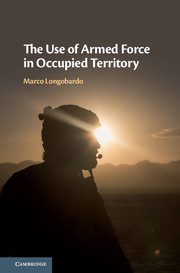 This book explores the international law framework governing the use of armed force in occupied territory through a rigorous analysis of the interplay between jus ad bellum, international humanitarian law, and international human rights law. Through an examination of state practice and opinio juris, treaty provisions and relevant international and domestic case law, this book offers the first comprehensive study on this topic. This book will be relevant to scholars, practitioners, legal advisors, and students across a range of sub-disciplines of international law, as well as in peace and conflict studies, international relations, and political science. This study will influence the way in which States use armed force in occupied territory, offering guidance and support in litigations before domestic and international courts and tribunals.

‘Marco Longobardo's book demonstrates that while many of the post-WWII occupations are contested between the States involved, the jus ad bellum and self-defence, international humanitarian law and human rights law provide generally binding rules for the use of force. A particular strength of this book is thorough analysis of conventional law, custom, and jurisprudence combined with a sound assessment of the differences between law enforcement and the conduct of hostilities.'

Dieter Fleck - Former Director International Agreements and Policy of the German Ministry of Defence, Member of the Advisory Board of the Amsterdam Center for International Law

‘The law governing occupation may seem to be ‘a sort of relic of another time', to borrow Dr Longobardo's words, but despite the evolution of international law it unfortunately still remains relevant. In a sense, this is the ultimate protection of human rights, where the occupying state must ensure rights and freedoms not of its own population but in a place where its presence, if legitimate at all, can only be temporary. Dr Longobardo's fine analysis of the use of armed force, especially through the lens of the human right to life, is a masterful scholarly contribution'

'This book is an achievement and one that will surely be a reference for years to come.'

‘The author's analysis is based on a very thorough research of the relevant material. It is particularly important to highlight the wide range of sources examined, including primary sources. The author is meticulous in his analysis and all the main elements of the question are identified and studied. Even if not all specialists will necessarily share the author's conclusions, these are supported by detailed legal reasoning and will advance discussions on the question of the use of force in occupied territory. As Professor Eyal Benvenisti sums it up very well in the foreword to the book, ‘Longobardo's comprehensive study, insightful analyzes and important suggestions will no doubt influence these debates and hopefully resolve some of the outstanding disagreements.’

‘The Use of Armed Force in Occupied Territory is an up-to-date, comprehensive and well-written contribution to the literature … Reading the book, I appreciated the arguments, ideas and insightful suggestions presented for a resolution of disagreements that are often prevalent in scholarly discussions on the legal aspects of the use of force in occupied territory. I would strongly recommend this impressive work as a reference point given the considerable coverage of the topic, and in particular, for those who seek to understand better the wide variety of questions related to the legal regulation of the use of armed force in occupied territories.’

‘… this book is definitely a welcome addition to the existing literature on the law of occupation. It furthermore presents interesting points, which are well argued and presented in a very structured manner. The present reviewer definitely found it to be a captivating read.'

Hanne Cuyckens Source: The Military Law and the Law of War Review

‘It is to the credit of Longobardo’s book that he clearly and convincingly shows when (and how far) these different areas of international law are relevant, what their precise scope of application is, and how they related to each other … This monograph distinguishes itself by the thoroughness of the analysis of practice as well as by the depth and logical coherence of its theoretical thought - a good guideline for appropriate restraints on the behaviour of occupying powers, and thus a brilliant contribution to the discussion of a thorny problem in international law and relations.’

‘The Use of Armed Force in Occupied Territory is an original, comprehensive, and professional study of the various aspects of the law of occupation. What seemed most attractive to me in this book and what I greatly enjoyed when reading the book is the courage of the Author to express new ideas, sometimes to divert from conventional understandings of the law of occupation, and to interpret existing norms in taking into account the new realities on the ground and State practices in the world we live in without ever forgetting the objective and purpose of those norms. Marco Longobardo’s Book is therefore a highly welcome contribution to the scientific literature that will be used as a point of reference for many years to come.’