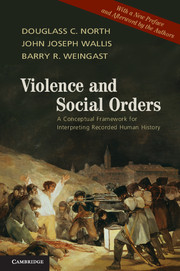 All societies must deal with the possibility of violence, and they do so in different ways. This book integrates the problem of violence into a larger social science and historical framework, showing how economic and political behavior are closely linked. Most societies, which we call natural states, limit violence by political manipulation of the economy to create privileged interests. These privileges limit the use of violence by powerful individuals, but doing so hinders both economic and political development. In contrast, modern societies create open access to economic and political organizations, fostering political and economic competition. The book provides a framework for understanding the two types of social orders, why open access societies are both politically and economically more developed, and how some 25 countries have made the transition between the two types.

Reviews of the hardback:‘With bravado, abandon, and great learning, North, Wallis, and Weingast have produced an excellent read - a book that is intriguing, entertaining, irritating, and provocative. Violence and Social Orders is an important book that deserves a wide readership. Its concepts will shape academic discourse and its arguments in the fields of economic history and development studies.'

‘If anyone is iconic in the economic history world Doug North certainly qualifies … This time, North is joined by two prominent and strong-minded co-authors, John Wallis and Barry Weingast. Their collaboration has been fruitful … Above all, the notion that one cannot simply 'get rid' of the superficial exterior of natural states and thereby uncover the beating heart of an open access order yearning to be free is the book's most important idea, and profound.'

‘A demanding but rewarding work, with intriguing echoes of Marx … Highly recommended.'

‘While there is still much more work to be done in understanding how to get from here to there, the authors' insights regarding the control of violence in natural, limited access societies versus modern, open-access societies are nonetheless major contributions … North, Wallis, and Weingast's analysis of violence and its suppression provides a simple, straightforward path to understanding both authoritarianism and transitional violence.'

‘… strong, persuasive … Anyone interested in development, economic history, the analysis of institutions or the idea of a generalized social science would do well to read this book … what is new in the book is the way its authors have connected, systematized and synthesized these previously disparate ideas to produce the limited-/open-access framework with which they propose to interpret human history. Their framework proves strikingly effective at this task … the new social science paradigm it presents is compelling and worthy of wide attention.'

'This much-anticipated, pioneering, sweeping millennial history explains how the evolution of impersonal and standardized treatment, a rule of law for elites, perpetual forms of organization, and consolidated political control of the military combined to produce the ‘open access' logic of rent erosion and economic growth often observed in the modern world. Emphatically multi-causal in approach, the book will persuade all those who want to analyze the complex interactions of beliefs, institutions, and organizations that they have to deal with its arguments.'

'Why do we obey laws, adhere to rules, and conform to norms? Doug North, John Wallis, and Barry Weingast offer a simple, powerful, and compelling answer - disorder and the violence it entails. This book is must-reading for anyone serious about the origins of social order and the reasons for its disintegration.'

'A masterful and revealing interpretation of how ‘nasty, brutish, and short' became healthy, wealthy, and peaceful and why the transformation occurred in some nations but not in others.'

'Violence and Social Orders is a thought-provoking, pioneering, and ambitious study. It should be read by anyone interested in the institutional underpinning of development.'

'This book presents a powerful new theory of the interaction between law, politics, and the structure of power. It is sure to be influential for decades to come.'

'Why are poor countries poor and rich countries rich? North, Wallis, and Weingast explain why - it's the politics stupid! A compelling book for anyone who wants to understand the world.'

'A demanding but rewarding work, with intriguing echoes of Marx … Highly recommended.'