From Violence to Mobilization in Rwanda and Bosnia-Herzegovina 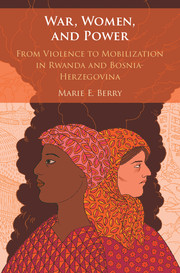 Rwanda and Bosnia both experienced mass violence in the early 1990s. Less than ten years later, Rwandans surprisingly elected the world's highest level of women to parliament. In Bosnia, women launched thousands of community organizations that became spaces for informal political participation. The political mobilization of women in both countries complicates the popular image of women as merely the victims and spoils of war. Through a close examination of these cases, Marie E. Berry unpacks the puzzling relationship between war and women's political mobilization. Drawing from over 260 interviews with women in both countries, she argues that war can reconfigure gendered power relations by precipitating demographic, economic, and cultural shifts. In the aftermath, however, many of the gains women made were set back. This book offers an entirely new view of women and war, and includes concrete suggestions for policy makers, development organizations, and activists supporting women's rights.

‘Berry's War, Women, and Power is a true tour de force. We know that periods of war are often followed by increases in women's political participation, but prior to this book, we didn't understand why. Combining careful historical analyses, with more than 260 interviews with political actors in Rwanda and Bosnia, Berry traces the process by which the destruction of war pushed women to develop new network ties, new community organizations, and new collective humanitarian projects, which in turn institutionalized new forms of women's political participation. Sadly, however, she also finds that these gains are relatively short lived. More than just a patriarchal backlash, Berry demonstrates how well-meaning international humanitarian assistance had the surprising and unanticipated consequence of flattening out women's nascent political gains. Engaging, heart wrenching, and original, War, Women, and Power is a must read for everyone interested in gender, war, and the necessity of building equitable post-war societies.'

‘This fascinating and important book examines the processes through which war facilitates women's grassroots mobilization through demographic, economic, and cultural transformations. It makes an original contribution to the study of gender and conflict. Moreover, it is well-written and nuanced, backed by strong evidence, drawing on a rich body of fieldwork in Rwanda and Bosnia.'

‘In this exceptional and often surprising book, Marie E. Berry shows how in disrupting power and gender relations, wars in Rwanda and Bosnia-Herzegovina created political and cultural openings that allowed women to mobilize in significant and surprising ways. An altogether extraordinary contribution to the literatures on war, contentious politics, and women's political participation.'

‘Can something good come of war? Looking deeply into the processes involved in the 1990s civil wars of Rwanda and Bosnia-Herzegovina, Marie E. Berry faces up to an uncomfortable contradiction. A period of death and destruction may be transformative for women, bringing them increased opportunities and political mobilization, both in the community and in the postwar power structures. Stopping to explore, rather than brush aside, such contradiction when you meet it, as the wisest social analysts know, is highly productive. Berry's unflinching investigation teaches us a lot about patriarchal gender power-relations - which turn out to have as much resilience as do women when it comes to surviving war.'

Cynthia Cockburn - Centre for the Study of Women and Gender, University of Warwick, and City University London

‘Marie E. Berry's book is a passionately engaged, yet scientifically embedded account of how women came to be politically empowered - yet ultimately remained vulnerable - activists and political actors in two post-violence countries. Her paired comparison shows how political opportunities often arose in the midst of social disorganization, as women turned the search for survival into the creation of new roles and responsibilities. Her well-crafted narratives shine a new light on the relationships among gender, war, and political mobilization.'

'A comparative study not only of the ways in which women responded to the wars in Rwanda and Bosnia, but also of what happened to the women and their visions for the future after the war officially ended.'

'There is much to be praised about this book … While others have argued that women’s political positions can change significantly for the better postwar, the meticulous engagement with the ways in which that happens and the limits to that transformation are worth reading … Its empirical work is very high quality, and it makes important theoretical contributions.'

'Berry’s book uniquely considers how war precipitates political engagement from the perspectives of women themselves. This is no small feat … If our current political situation is any indication, War, Women, and Power will prove insightful for a range of questions beyond Rwanda and Bosnia concerning women’s activism and the violence that manifests in their lives when they challenge the status quo. It is a landmark book set to shape the conversation on gender, conflict, and mobilization for decades to come.'

'Berry has not only given us an incredibly detailed examination of how structural forces have an impact on women’s lives, but a book that is a shining example of how to combine field research and interviews with statistics to really grab a reader’s attention … Simultaneously heartbreaking and uplifting, this work is a must-read for gender scholars and humanitarian players.'

'… this book fills an important void in the broader scholarship on women and war by focusing on how episodes of mass violence intervene in - rather than simply reflect - the gendered power relations that undergird politics, prewar, during war, and postwar.'