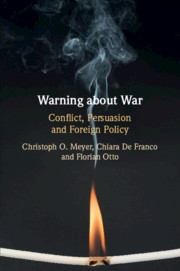 What does it take for warnings about violent conflict and war to be listened to, believed and acted upon? Why are warnings from some sources noticed and largely accepted, while others are ignored or disbelieved? These questions are central to considering the feasibility of preventing harm to the economic and security interests of states. Challenging conventional accounts that tend to blame decision-makers' lack of receptivity and political will,  the authors offer a new theoretical framework explaining how distinct 'paths of persuasion' are shaped by a select number of factors, including conflict characteristics, political contexts, and source-recipient relations. This is the first study to systematically integrate persuasion attempts by analysts, diplomats and senior officials with those by journalists and NGO staff. Its ambitious comparative design encompasses three states (the US, UK, and Germany) and international organisations (the UN, EU, and OSCE) and looks in depth at four conflict cases: Rwanda (1994), Darfur (2003), Georgia (2008) and Ukraine (2014).

'Meyer, De Franco, and Otto show that the problem of warning needs to be conceptualized broadly and seen as part of an interactive foreign policy process, with important warners being not only government officials, but NGOs, the media, and informal advisors. The sophisticated analysis is supported by detailed case studies drawing on a wide variety of unusual sources, and the result is a book of great interest.'

'Warning about War is essential reading for all those who study and work in the field of conflict and atrocity prevention. It makes a significant contribution to our understanding of when warnings about violence are heeded, and what warners could do to make their messages more persuasive. Meyer, de Franco and Otto argue that warnings about conflict take place in the wider context of foreign policy-making, and they provide an innovative conceptual and theoretical framework for explaining when and why warnings have an effect on foreign policy-makers. Case studies include the Rwandan genocide and the more recent Russian-Ukrainian conflict.'

'A fascinating study of how and when warnings about future conflict are listened to. The authors show that warnings are rarely as clear or as numerous in the actual event as they later seem in hindsight, making the job of warning of and preventing conflicts and humanitarian crises even more difficult than many believe.'

'There has been a surge of academic interest in improving conflict predictions, often based on the premise that early warning can help promote early action to prevent conflict outbreaks or limit escalation, but often very little attention to how policy makers respond to prediction and when it is likely to motivate action. Popular discourse often tend to see conflicts and disasters as predictable, and criticize politicians for failing to act, with limited attention to the problems of hindsight bias and the difficulties in predicting conflict ex ante. This book summarizes a sustained research program on when warnings are likely to lead to action and what makes warnings more or less persuasive. It will deserves to be read by all scholars interested in conflict prediction, conflict management, and how to bridge the gap between research and policy.'

'Warning about War: Conflict, Persuasion and Foreign Policy makes a tremendously valuable contribution to the study of and strategy for conflict prevention, and the ‘warning-response gap’ in particular. It draws on extensive research, integrates literatures across subfields too often treated separately, and builds its analysis through mixed methodologies. In so doing it both advances theoretical understanding of these crucial issues and delineates policy recommendations to help close the warning-response gap.'

‘This sophisticated analytical treatment of the theory of political conflict will interest specialists and professionals studying or involved in conflict resolution.’