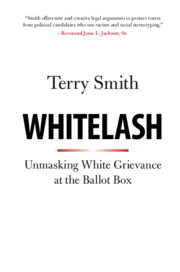 If postmortems of the 2016 US presidential election tell us anything, it's that many voters discriminate on the basis of race, which raises an important question: in a society that outlaws racial discrimination in employment, housing, and jury selections, should voters be permitted to racially discriminate in selecting a candidate for public office? In Whitelash, Terry Smith argues that such racialized decision-making is unlawful and that remedies exist to deter this reactionary behavior. Using evidence of race-based voting in the 2016 presidential election, Smith deploys legal analogies to demonstrate how courts can decipher when groups of voters have been impermissibly influenced by race, and impose appropriate remedies. This groundbreaking work should be read by anyone interested in how the legal system can re-direct American democracy away from the ongoing electoral scourge that many feared 2016 portended.

'In Whitelash, Professor Terry Smith’s clearly written and cogently argued book, he offers new and creative legal arguments of how to use the 14th Amendment’s equal protection clause to protect voters from political candidates who use racism and racial stereotyping to advance their policies or sway a citizen’s vote. He wants to make it illegal to do so.'

'Whitelash is a boldly imaginative and insightful book. Terry Smith reveals how racial resentments lead white voters to support candidates who corrupt the ideals of democratic and inclusive citizenship. His original and generative arguments show that the appeals to racial bias directed at white voters by political demagogues are not only unwise, but also display characteristics that have been ruled illegitimately racist in court decisions about hiring policies, jury deliberations, and legislative actions. Whitelash is both an accurate description of, and a remedial prescription for, the racist nightmares that plague the nation.'

George Lipsitz - author of The Possessive Investment in Whiteness

'Whitelash is a searing takedown of white anger and its costs to democracy. Terry Smith persuasively weaves in law, history, politics and critical theory to make the case that the ascendance of a race baiting demagogue is more consistent with the story of America than a departure from it. A profound elegy on race relations in the Age of Trump, Whitelash offers essential analysis on how we ended up here, and how we can disrupt this tragic history from repeating itself.'

'Drawing deftly upon his experience as an election law expert and employment discrimination litigator, Terry Smith offers a provocative and ambitious framework for assessing the degree to which our elections are infected by racism and for remedying this vicious assault on our democracy. By centering the agency of voters, Whitelash forces us to critically examine the role of individual actors at the ballot box under the aegis of state and federal elections apparatus and the responsibility they collectively bear in the current in leadership crisis in America. This powerful examination of how we might expand anti-discrimination jurisprudence in service of enhancing the integrity of our democracy could not be more timely or necessary.'

'Whitelash also challenges the reader to consider voting as a social function. The legal arguments are based on the fact that voting is a consequential public act, and in the closing chapters Smith demonstrates how permitting its use as an instrument of racist backlash is eroding public institutions that can intervene on behalf of the common welfare. It is hard to imagine many of these suggestions being realized by a judiciary that has been, to put it charitably, inconsistent in applying civil equality, or a citizenry indoctrinated into austere individualism; but Smith, with his expertise in election and anti-discrimination law, shows that we still have some tools left, if we would use them.'

‘Required reading in this election year, Whitelash will prove impactful in the classroom and in scholarly discussions of racial politics.’

‘… Whitelash is a provocative read… both novices to the study of race and the law, as well as seasoned veterans, will find much to engage. Read Whitelash to understand how the phenomena of racial backlash is not confined to the US.’