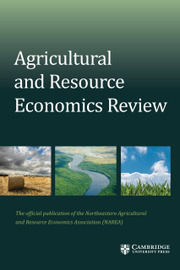 This is an Open Access article, distributed under the terms of the Creative Commons Attribution licence (http://creativecommons.org/licenses/by/4.0/), which permits unrestricted re-use, distribution, and reproduction in any medium, provided the original work is properly cited.
Copyright
Copyright © The Author(s) 2018

What do you want your profession to look like? When you walk into a conference reception, what atmosphere and what mix of identities and perspectives do you want to encounter? When you present your new research, what voices do you want to hear giving feedback? Most importantly, what do you need from an academic community to be able to picture yourself as a full contributing member in intellectual and professional exchange?

We need a professional community that enables us to excel: one in which we can share our work and learn about the work of others, mentor and be mentored, and engage with advances in research, policymaking, teaching, and extension. I feel strongly that we cannot have the profession we want without both diversity and true inclusion. No one can do their best work when they feel unwelcome, and the profession suffers when we exclude voices: economists should know that a constrained optimum is dominated by one with fewer constraints.

NAREA has a special opportunity in this moment when the economics profession and the culture more broadly are thinking about how the wrongs of history have been carried forward into positions of disadvantage today. NAREA is a small, close-knit professional association that has always prided itself on mentoring and professional development. We can be on the forefront of diversity and inclusion in our profession by committing, as an organization and as individuals, to see and respect each other as individuals; by so doing, we will make NAREA stronger and more vibrant and set an example for economics more broadly.

I don't need to tell you that economics has issues related to diversity and inclusion. Many of us have been privately sharing stories for years about our friends or ourselves being treated as less valid or relevant in professional academic work because of gender, race, ethnicity, sexual orientation, or other identity elements. In 2017, these conversations were forced into the open when Justin Wolfers wrote (Reference Wolfers2017) in the New York Times about the UC Berkeley undergraduate honors thesis of Alice Wu (Reference Wu2018), who used text analysis of the notorious Economics Job Market Rumors website to show that women economists were systematically discussed, not as scholars, but as physical objects, and described in the most degrading terms; she also showed rampant homophobic language used with regard to men.

Since that time, difficult but important discussions have been bubbling in all corners of the economic profession. The fields that NAREA represents, including agricultural, environmental, and resource economics, show no more diversity than economics as a whole (e.g., Chari and Goldsmith-Pinkham, Reference Chari and Goldsmith-Pinkham2017), and we at NAREA have thrown ourselves into the work of identifying problems and finding solutions.

Let's start with the problems. We know that women and people of color are underrepresented in economics and have been for decades (Bayer and Rouse, Reference Bayer and Rouse2016). We do not even know much about underrepresentation of sexual or gender minorities or people with disabilities because of a lack of data. We know that this underrepresentation is not caused by an inability to do rigorous, technical work; indeed, economics performs worse on diversity than STEM fields in general and mathematics in particular (Bayer and Rouse, Reference Bayer and Rouse2016). We also know that we are losing diverse scholars at every point in the pipeline. For example, in the process of undergraduate education, women leave the economics major at a higher rate than men (Avilova and Goldin, Reference Avilova and Goldin2018), and at every further step (completing the PhD, getting tenure, and getting promoted to full professor), the gender imbalance widens (Lundberg, Reference Lundberg2017).

You might say that economics is a meritocratic field where the best work rises to the top regardless of the identity of the scholar who produced it. Evidence repudiates this claim. For example, in economics, women's CVs are evaluated differently than men's (Sarsons, Reference Sarsons2017), and women's papers are held to a higher standard, perhaps distorting women's productivity (Hengel, Reference Hengel2017). Additionally, even if it were true, these imbalances would be problems per se because a lack of diversity is unfair and makes economics poorer. First, no one who wants to be part of economics should be made to feel that, because of their identity, they don't belong. Second, economics is better with more diverse voices. For example, on average, women and men consider different topics to be important for research, and they have different policy perspectives (The Economist, 2018). It is therefore not always possible to decouple our identities from our scholarly and policy work. Third, having a variety of voices can help economics avoid group-think, as people from different backgrounds bring different perspectives (Stahl et al., Reference Stahl, Mäkelä, Zander and Maznevski2010).

We know some of the causes of our low diversity. Some students from underrepresented groups may have poor preparation before undergraduate education. Early classes may also play a role in convincing these students that economics is not for them, by using examples they can't relate to or don't feel are important (for example, sports and finance examples), and even by simply using names and pronouns that these students don't identify with (and, as Stevenson and Zlotnik, Reference Stevenson and Zlotnik2018 show, economics textbooks represent men far more often in examples and give them more agency than the women in examples). There is also a significant amount of discrimination that has been documented in all levels of academic work, including, as noted above, in how our CVs are viewed for tenure and how our papers are reviewed at journals. This discrimination and the kinds of attitudes highlighted in Wu's work contribute to a climate in many economics settings that are unfriendly to people with non-majority identities. Further, the lack of representation feeds back into itself: role models of the same identity can help encourage students to continue (Porter and Serra, Reference Porter and Serra2017), and mentoring and support are crucial to help develop young scholars.

NAREA formed an ad hoc committee, headed by me and including Jill Caviglia-Harris, Jeff O'Hara, and Leah Palm-Forster, to consider what we could do as an organization about this. We are not alone in the profession in working on these issues.Footnote 1 But NAREA has made some important steps, and is arguably on the vanguard of professional associations in economics on these issues.

First, we presented a draft Statement of Commitment to Inclusion and a draft Events Code of Conduct for members’ consideration at the NAREA 2018 annual meeting. Second, we organized a special plenary session on diversity and inclusion at the 2018 conference, moderated by then-President-Elect David Just and featuring Belinda Archibong, Todd Schmit, and me. The room was packed, and attendees were rapt. Clearly, these issues resonated with our members. A followup survey confirmed members’ strong support of NAREA's actions on these issues. We are grateful for all who participated in these conversations.

We have refined these documents and will propose their adoption at the 2019 annual meeting. Once adopted, the Events Code of Conduct will be electronically signed by all conference registrants. We want to keep working on other initiatives; we have some works in process, but we also need your feedback to know what steps you would value. For example, we know that our Career Advancement and Mentoring program (CAM) and other efforts seem to do a good job of promoting women economists, but people of color remain noticeably underrepresented. We need to figure out how we can make ourselves more welcoming or relevant to those scholars.

Conversations about inclusion are hard because they challenge the status quo and make us grapple with systemic injustices, including those that have benefited some of us at the expense of others. Economists, like people in domains all across society, are at this moment being made to face some unpleasant truths about how people of certain identities have been and continue to be treated. As a profession, and as individuals in that profession, we must do better. NAREA can and will step up to become a leader in making all identities feel that they and their work are valued in economics. We strive to be that inclusive community in which all scholars in relevant fields feel and truly are welcome and valued. Join us in this important work.

Many thanks to Jill Caviglia-Harris, Gal Hochman, David Just, Jeff O'Hara, and Leah Palm-Forster for comments on this paper and collaboration on the ad hoc committee. I am also grateful to Belinda Archibong, David Just, and Todd Schmit for participating with me on the panel at NAREA's 2018 conference, and to all members who've given feedback on these issues.

1 In the American Economic Association (AEA), the Committee on the Status of Women in the Economic Profession (CSWEP) and the Committee on the Status of Minority Groups in the Economic Profession (CSMGEP) have been working on these issues for years, and there is a newer group representing LGBTQ economists. The AEA recently approved an economists’ professional code of conduct and created EconSpark to replace the problematic Economics Job Market Rumors. The AEA runs the Summer Program and the Pipeline Mentoring Program to support undergraduate and PhD students, respectively, from underrepresented groups. Claudia Goldin has launched the Undergraduate Women in Economics program to address the start of the pipeline. The CORE project (https://www.core-econ.org/) offers more inclusive textbooks. The Diversity Initiative for Tenure in Economics (DITE) has been working to mentor tenure-track scholars. Within our fields, AAEA sections CWAE and COSBAE are working on these issues, and the AAEA is developing an antiharassment policy.