International Law Status of Wto Dispute Settlement Reports: Obligation to Comply or Option To “Buy Out”? 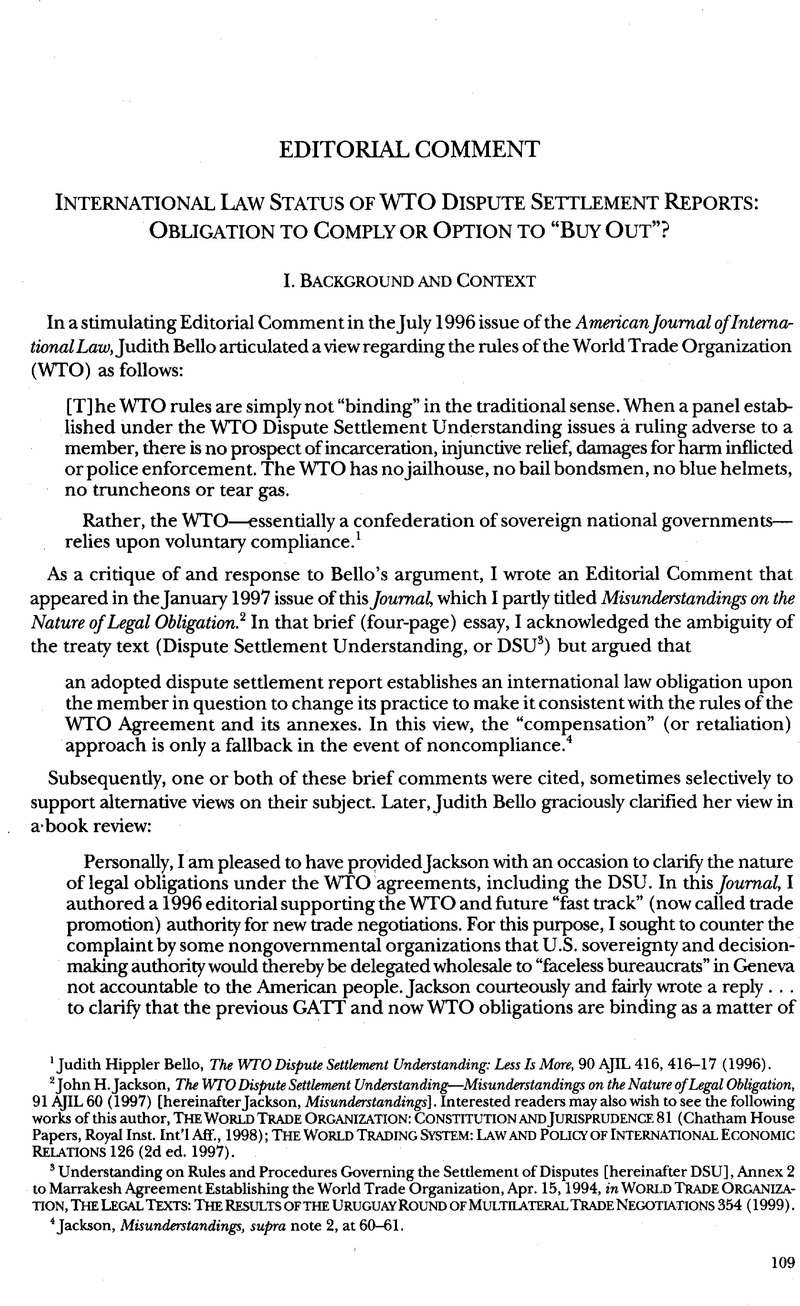 11 Vienna Convention on the Law of Treaties, opened for signature May 23, 1969, 1155 UNTS 331. Note that not all members of the WTO have ratified, and thus accepted, the Vienna Convention (e.g., Brazil, France, and the United States), but there is still general agreement that die Vienna Convention clauses on treaty interpretation (Arts. 31, 32) articulate die customary international law on the subject. The Convention’s approach to treaty interpretation can of course be criticized as unable to cope with certain problems currently facing world international institutions (but diat is a subject for a different article).

14 The word “charter” is an informal term, and is not used in the treaty itself. See Marrakesh Agreement Establishing the World Trade Organization, in The Legal Texts, supra note 3, at 3.

18 Readers can find numerous references in GATT documents, including panel reports, to preparatory work in the 1947 and 1948 conferences on drafting the GATT. Many of these documents are collected in the important GATT document, Analytical Index: Guide to Gatt Law and Practice (6th ed. 1995).

19 A prime example is Japan—Taxes on Alcoholic Beverages, supra note 13, where the Appellate Body, in footnote 39, cites for object and purpose the EPCT documents (documents of the Preparatory Committee of the United Nations International Conference on Trade and Employment, denoted by the symbol E/PC/T), which are the documents of the GATT preparatory work.

20 Implications of the “buy-out” approach might be inferred, although not without ambiguity, from the testimony of high U.S. officials in the 1994 congressional hearings, where the officials were urging approval of the Uruguay Round negotiated trade agreements. Uruguay Round GATT Agreement: Testimony of Ambassador Michael Kantor, U.S. Trade Representative, Before the House Committee on Agriculture (Mar. 16, 1994); Ambassador Rufus Yerxa, Deputy United States Trade Representative, The World Trade Organization and U.S. Sovereignty: Prepared Testimony Before the Senate Foreign Relations Committee (June 14, 1994), both available in LEXIS, Legis Library, Hearing File.

26 Japan—Taxes on Alcoholic Beverages, supra note 13, pt. E, “Status of Adopted Panel Reports,” 3d & 6th paras, (including the statement referring to adopted GATT panel reports as “not binding, except with respect to resolving the particular dispute between the parties to that dispute”; id., text at n.30).

39 In particular, there were strong feelings about the need to “rein in” United States unilateralism. This was a fairly explicit goal of the European Community, sparked heavily by attitudes of the French, in the Uruguay Round, and it resulted basically in a 180-degree shift in attitude toward the need for a more rigorous DS system, compared to the position of the Europeans in the Tokyo Round of the 1970s, when they opposed improving or adding rigor to the DS system under the GATT.

45 This case was not appealed by either side, and has been construed as an interesting approach to giving certain advantages and linguistic assurances to both the complainants and the respondents in a way that enabled both to claim victory.

48 United States—Anti-Dumping Act of 1916, WTO Doc. WT/DS136/AB/R (adopted Sept. 26, 2000). An interesting possible parallel question occurs in the human rights jurisprudence, particularly that of the European Court of Human Rights, as argued in Orakhelashvili, Alexander, Restrictive Interpretation of Human Rights Treaties in the Recent Jurisprudence of the European Court of Human Rights, 14 Eur. J. Int’l L. 529 (2003) (maintaining that restrictive interpretations are not appropriate for the conventions on human rights because of the erga omnes nature of the obligations and the concept that the object and purpose of the conventions is not the exchange of reciprocal rights, but the protection of the human rights of all individuals within the ambit of the convention).

60 The “Member concerned” is the party to the dispute to which the panel or Appellate Body recommendations are directed. [Editor’s note: This is DSU note 9.]

61 With respect to recommendations in cases not involving a violation of GATT 1994 or any other covered agreement, see Article 26. [Editor’s note: This is DSU note 10.]

International Law Status of Wto Dispute Settlement Reports: Obligation to Comply or Option To “Buy Out”?