The Legal Status of the Bukovina and Bessarabia 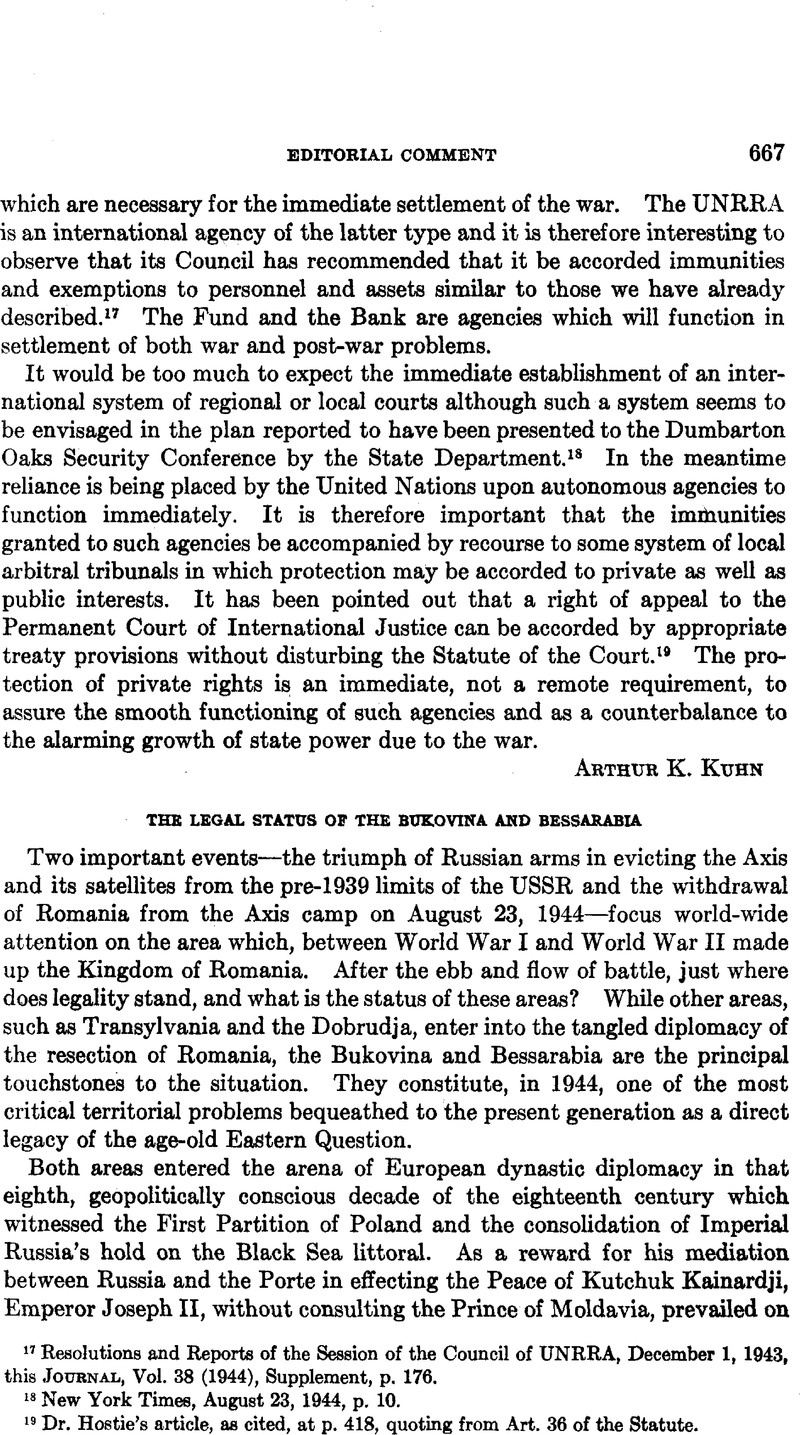 COPYRIGHT: © by the American Society of International Law 1944

2 The texts of the Treaty of Bucharest and its accompanying Military Convention are given in English translation in Charles Upson Clark's Greater Roumania, New York, 1922, pp. 171–177. The territories ceded are carefully defined in Article IV of the treaty.

3 “Austria renounces, so far as she is concerned, in favour of Romania all rights and title ever such portion of the former Duchy of Bukovina as lies within the frontiers of Romania which may ultimately be fixed by the Principal Allied and Associated Powers.” For the text see this Journal, Vol. 14 (1920), Supplement, p. 22.

5 Except in the fugitive propagandist literature looking to the creation of an enlarged federative Poland or a “ Carpathian Switzerland, ” partly Hungarian, partly Romanian and partly Ruthene, no other govemmentally sponsored claim to the Bukovina appears to have been put forward save by the Governments of the Western Ukrainian Republic, the [Eastern] Ukrainian Democratic Republic and the Ukrainian Soviet Republic. As none of these was actually recognized by the Principal Allied and Associated Powers, their claims were not seriously considered. It does not appear that during 1919 and 1920 the RSFSR put forward any claim of its own to the Bukovina.

8 For the text of this treaty see British and Foreign State Papers, Vol. CXII (1921), pp. 647–651; also this Journal, Vol. 17 (1923), Supplement, pp. 7–11. The Commission entrusted with Jugoslav and Romanian affairs at the Paris Peace Conference apparently reported to the Supreme Council as early as April 6, 1919, a recommendation favoring the incorporation of Bessarabia in Romania; in March, 1920, the Supreme Council notified the Romanian Government that “After taking into full consideration the general aspirations of the populations of Bessarabia and the Moldavian character of that regioD from the geographical and ethnographical points of view, as well as the historic and economic arguments,” the Principal Allied Powers were ready to pronounce themselves in favor of the reunion of Bessarabia with Romania which had by that time been formally declared by the Bessarabian representatives, and were desirous “to conclude a treaty in recognition of this as soon as the conditions stated have been carried out” (Armstrong, work cited, pp. 148–149). In the preamble to the treaty it was declared that “in the interests of general peace in Europe” it was “of importance to assure henceforth a sovereignty over Bessarabia in accordance with the aspirations of the population, and guaranteeing to its racial, religious and linguistic minorities the protection which is due them”; that from geographic, ethnographic, historic and economic points of view the reunion of Bessarabia to Romania was fully justified and that the population of Bessarabia had given proof of its desire to see Bessarabia reunited to Romania.

9 The very language of Article 9 of the Bessarabian Treaty illustrates this: “The high contracting parties will invite Russia to adhere to the present treaty as soon as a Russian Government recognized by them shall be in existence. They reserve the right to submit to the arbitration of the Council of the League of Nations all questions which the Russian Government may raise respecting the details of this treaty, it being understood that the frontiers defined in the present treaty, as well as the sovereignty of Romania over the territories therein comprised, cannot be called in question.”

11 “The Government of the USSR” declared Molotov to Davidescu, the Romanian Minister in Moscow, on June 26, 1940, “considers that the question of the restoration of Bessarabia is organically bound with the question of transfer to the Soviet Union of that part of Bukovina of which the population in its overwhelming majority is bound to the Soviet Ukraine by the unity of historic destinies as well as by unity of language and national composition. This act would be all the more just, in that the transfer of Northern Bukovina to the Soviet Union could constitute in only an insignificant degree, it is true, a means of compensation for the tremendous damage inflicted on the Soviet Union and the population of Bessarabia by twenty-two years of Romanian domination in Bessarabia ”: New York Times, June 29, 1940, p. 8, col. 4.

12 The Soviet ultimatum of June 26 addressed by Molotov to Davidescu bluntly proposed “ (1) to restore Bessarabia to the Soviet Union, (2) to transfer to the Soviet Union Northern Bukovina within the boundaries shown on the accompanying map.” “The Government of the USSR hopes,” added the ultimatum, ”that the Royal Government of Romania will accept these proposals and thus create the possibility of peaceful settlement of the protracted conflict between the USSR and Romania.” In its reply of June 28, 1940, the Romanian Government declared through Davidescu to Molotov: “To preserve the possibility of avoiding serious consequences which would result from the application of force and the outbreak of hostilities in this part of Europe, the Romanian Government finds itself obliged to accept the conditions of evacuation contained in the Soviet [note].” For the full texts of the correspondence see New York Times, June 29, 1940, page 8, cols. 4–8.

13 According to David J. Dallin, Romania’s declaration of war was made on June 22,1941. “It was accompanied by an order of General Antonescu to the Romanian army stating: ‘Free your oppressed brothers from the yoke of Bolshevism; bring all Bessarabia, and the woods of Bukovina, your fields and meadows, back into the fatherland’: Soviet Russia’s Foreign Policy, 1939–1942, New Haven, 1942, p. 378. According to the Department of State Bulletin, Vol. V, No. 130 (December 20,1941), p. 556, “No record of a formal declaration of war has been found,” although the chargé d’affaires of the Romanian Legation in Washington declared to the press on June 22,1941, that ‘ ‘ the Romanian army is acting today to liberate and recover Romanian national patrimony overrun without justification by the unprovoked aggression of Communist Russia”: New York Times, June 23, 1941. p. 7.

14 According to a Bucharest despatch of July 15 to the New York Times the Vice-Premier of Romania announced the liberation of Bessarabia and Northern Bukovina from Soviet rule. New York Times, July 16, 1941, p. 6, col. 2.

15 According to Dallin (work cited, p. 357), as early as February, 1941, General Antonescu appointed prefects for Soviet-occupied Bessarabia. This was obviously intended to restore not merely the international but the constitutional and administrative status quo ante in the regions ceded in 1940.

16 In a statement by Charles Davila, formerly Romanian Minister to the United States, carried by the Associated Press, it is asserted that ”the terms of Romania's surrender … provide'that Romania shall cede Bessarabia and Northern Bukovina to Russia, areas claimed by Russia as legally part of its territory for several years”: Los Angeles Times, August 26,1944, page 1, col. 4. Despite the loose language used in the despatch the tenacity of the Russian viewpoint is obvious.

17 “The declaration of war against Germany, fulfilling the Russian prerequisite for acceptance of the Romanian offer to change to the Allies’ side” came in a royal proclamation on August 25,1944, setting forth various German acts of aggression “which occurred simultaneously in various parts of the country” in consequence of which “Germany has placed herself in a state of war with Romania.” New York Times, August 26, 1944.

19 In an official statement broadcast by the Moscow Radio on August 25, 1944, Foreign Commissar Molotov re-stated a pledge made by the USSR to Romania when the first moves for armistice were made in April, 1944, substantially in the terms quoted. Los Angeles Times, August 26, 1944, p. 1, col. 4.

The Legal Status of the Bukovina and Bessarabia