On the Search for Extraterrestrial Intelligence (SETI) 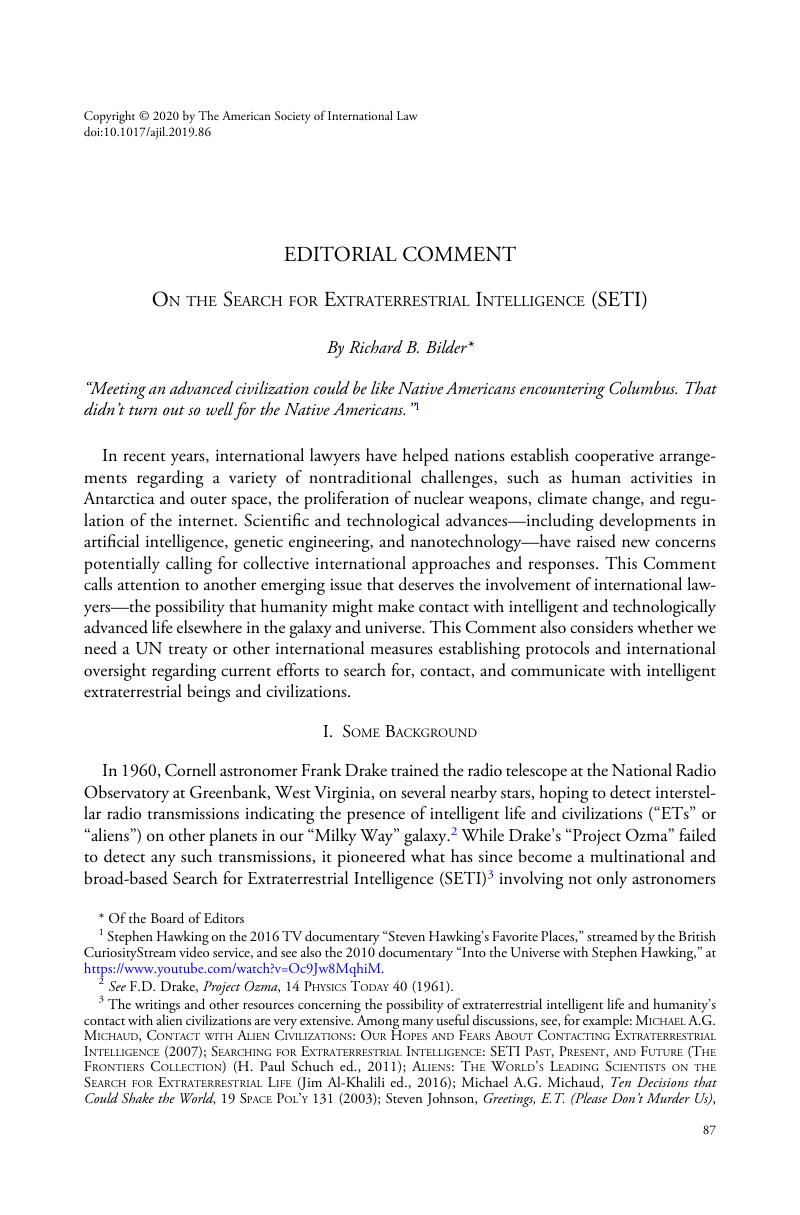 1 Stephen Hawking on the 2016 TV documentary “Steven Hawking's Favorite Places,” streamed by the British CuriosityStream video service, and see also the 2010 documentary “Into the Universe with Stephen Hawking,” at https://www.youtube.com/watch?v=Oc9Jw8MqhiM.

5 The so-called “Drake equation,” proposed by Frank Drake in 1961, is a widely accepted tool used by the scientific community to estimate the probable number of technologically advanced and communicative extraterrestrial civilizations in our galaxy. The “equation” summarizes the factors likely to play a role in the emergence of intelligent extraterrestrial life, development of an alien civilization, and the possibility of detecting it, such as the average rate of planet formation in the galaxy, the fraction of planets that can potentially support life and on which intelligent life develops, the fraction of such planets that develop technology capable of broadcasting messages into space, and the length of time it takes such civilizations do so. The “equation” suggests that, as a matter of probability, even if the fraction of planets meeting all of these requirements is very small, the existence of billions of planets in the galaxy makes it likely that, nevertheless, there are many technologically advanced alien civilizations in our galaxy. See, e.g., Elizabeth Howell, Drake Equation: Estimating the Odds of Finding E.T., Space.com (Apr. 6, 2018), at https://www.space.com/25219-drake-equation.html; Wikipedia, Drake Equation, at https://en.wikipedia.org/wiki/Drake_equation. Some scientists and others are skeptical, however. In 1950, Enrico Fermi, the Italian physicist instrumental in the development of the atomic bomb, is reported to have asked “Where is everybody?,” expressing what has become known as the “Fermi paradox”—the apparent contradiction between estimates for the existence of many alien civilizations and the fact that as yet we have had no contact or other evidence of them. See, e.g., Elizabeth Howell, Fermi Paradox: Where Are the Aliens?, Space.com (Apr. 27, 2018), at https://www.space.com/25325-fermi-paradox.html; Wikipedia, Fermi Paradox, at https://en.wikipedia.org/wiki/Fermi_paradox. While the lack of such contact—the so-called “great silence”—may be explained by the nonexistence of intelligent ETs and alien civilizations, SETI proponents suggest alternative explanations. These include that: alien civilizations are sparse; have not developed communications technology we could detect; are not interested in, have an ethic of not interfering with, or fear contacting us; are too distant to contact us; or they have already destroyed themselves. See, e.g., Stephen Webb, If the Universe Is Teeming with Aliens . . . Where Is Everybody? Seventy-Five Solutions to the Fermi Paradox and the Problem of Extraterrestrial Life (Science and Fiction) (2d ed. 2015); Sarah Kaplan, Scientists Believe There's Other Life in the Universe. Why Haven't We Found It Yet?, Wash. Post (July 21, 2015), at https://www.washingtonpost.com/news/morning-mix/wp/2015/07/21/scientists-believe-theres-other-life-in-the-universe-why-havent-we-found-it-yet.

13 See the “Strategic Plan 2015–2018” that was adopted by METI International's Board of Directors on August 19, 2015 and the version that was amended on February 3, 2016, at http://meti.org/en/strategic-plan-0. See also Contacting Extraterrestrials: Nanoo Nanoo, Earth Invites the Inhabitants of a Distant Planet to Chat, Economist (Nov. 18, 2017) (reporting METI's “Sonar calling GJ273b” message from Norway's Remsfjord radio antenna toward Luyten's star 12.4 light years from Earth).

14 See, e.g., Brin, David, The Search for Extra-Terrestrial Intelligence: Should We Message ET?, 67 J. Brit. Interplanetary Soc'y 8 (Jan. 2014); Marko Kovic, Contacting Aliens Is a Horrible Idea: Actively Messaging Extraterrestrial Civilizations Would Be Humankind's Final Folly, Medium (Dec. 7, 2017), at https://medium.com/@marko_kovic/contacting-aliens-is-a-horrible-idea-d6f4e0ada22; Johnson, supra note 3. See also the July 2015 statement “Regarding Messaging to Extraterrestrial Intelligence (METI)/Active Searches for Extraterrestrial Intelligence (Active SETI)” signed by twenty-eight scientists, stating that “intentionally signaling other civilizations in the Milky Way Galaxy raises concerns for all the people of Earth about both the message and the consequences of contact. A worldwide scientific, political and humanitarian discussion must be held before any message is sent,” at https://setiathome.berkeley.edu/meti_statement_0.html.

17 But see Lyall & Larsen, supra note 3, at 494 (noting that: “The major body of international law relevant to most SETI enquiry is the allocation and use of the radio spectrum secured through the mechanisms of the International Telecommunication Union (the ITU).”). The authors give a detailed description of the ITU and its Radio Regulations in Chapter 8 of their book. See also the AJIL Unbound Symposium on “The New Space Race,” 113 AJIL 92–129 (2019), at https://www.cambridge.org/core/journals/american-journal-of-international-law/ajil-unbound-by-symposium/the-new-space-race.

18 See generally, e.g., Lyall & Larsen, supra note 3, “SETI Protocols,” at 500–05; IAA SETI Permanent Committee, IAA SETI Permanent Committee SETI Protocols, at http://www.setileague.org/iaaseti/protocol.htm. The IAA SETI Permanent Study Group has also developed several “scales” as tools to assist in evaluating components of SETI-related decisions: the Rio Scale to quantify the impact of any public announcement regarding the detection of ET intelligence; the San Marino Scale regarding risks of transmissions from Earth; and the proposed London Scale regarding the detection of intelligent alien life.

22 See, e.g., Michaud, Michael A.G., If Contact Occurs, Who Speaks for Earth?, 78 For. Serv. J. 23 (Apr. 2001). In September 2010, several British newspapers (The Sunday Times, The Guardian, and The Telegraph) as well as other media, reported, incorrectly, that the United Nations planned to appoint Malaysian astrophysicist Mazlan Othman, then director of UNOOSA, as the UN's ambassador to act as the first point of contact and/or meet aliens trying to communicate with or coming to Earth. However, the reports turned out to be false. The Guardian reported that Dr. Othman said: “It sounds really cool, but I have to deny it.” See, e.g., Matthew Weaver, UN Plan for “Alien Ambassador” a Case of Science Fiction?, Guardian (Sept. 27, 2010), at https://www.theguardian.com/news/blog/2010/sep/27/un-alien-ambassador-mazlan-othman; N.L. Alien Diplomacy: The UN's Secretive Alien Ambassador, Economist (Sept. 28, 2010), at https://www.economist.com/babbage/2010/09/28/the-uns-secretive-alien-ambassador.

23 In her article on Supra-Earth Affairs, supra note 21, Dr. Mazlan Othman, then director of UNOOSA, noted, as summarized in the abstract to her article, that: “The United Nations briefly considered the issue of extraterrestrial intelligence at the 32nd session of the General Assembly in 1977. As a result, the Office of Outer Space Affairs was tasked to prepare a document on issues related to ‘messages to extraterrestrial civilizations,’ but this area has not been followed through in more recent times.” Id. at 693.

25 See generally Lyall & Larsen, supra note 3, at 39–45 (noting, inter alia, that “the generality of states are willing to lay out principles and rules under which the exploration and use of space should be conducted and municipal space affairs be arranged,” “the evidence so far at least is that the space-competent states do generally comply with the broad principles expressed in these resolutions,” and that “the history of compliance with the UN Space Resolutions has swiftly elevated each of them at least to the category of ‘soft law’”).

On the Search for Extraterrestrial Intelligence (SETI)