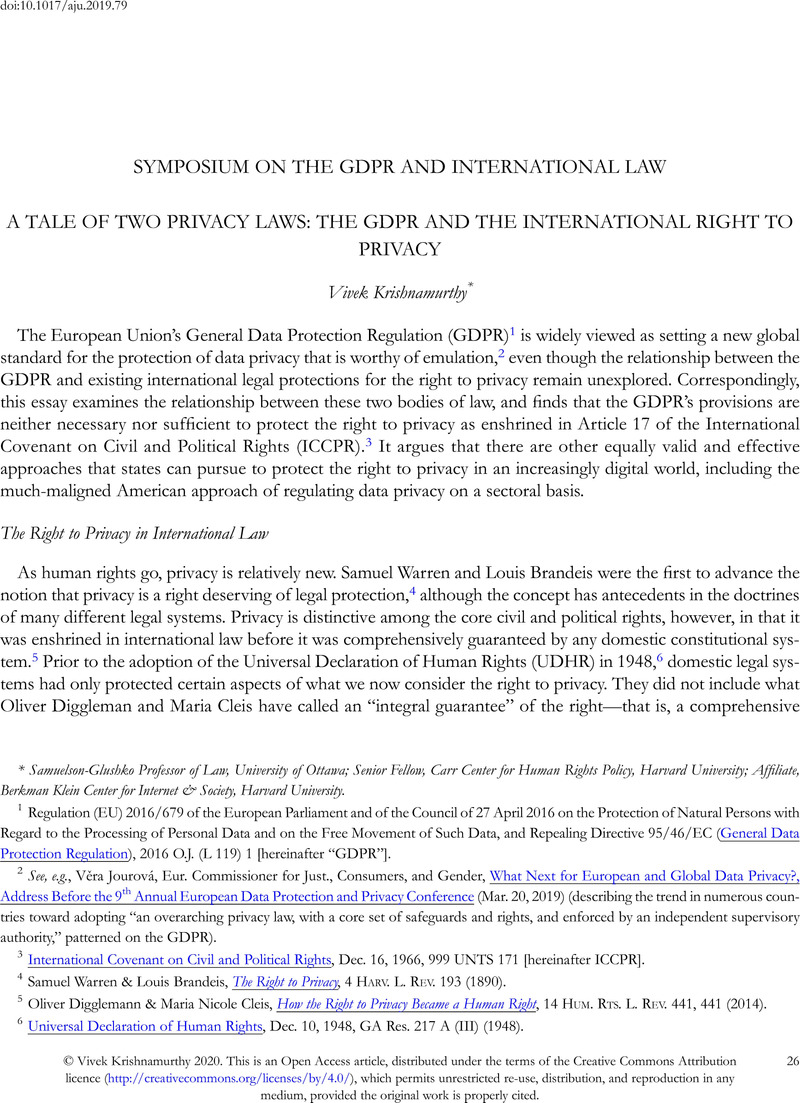 COPYRIGHT: © 2020 Vivek Krishnamurthy
This is an Open Access article, distributed under the terms of the Creative Commons Attribution licence (http://creativecommons.org/licenses/by/4.0/), which permits unrestricted re-use, distribution, and reproduction in any medium, provided the original work is properly cited.

1 Regulation (EU) 2016/679 of the European Parliament and of the Council of 27 April 2016 on the Protection of Natural Persons with Regard to the Processing of Personal Data and on the Free Movement of Such Data, and Repealing Directive 95/46/EC (General Data Protection Regulation), 2016 O.J. (L 119) 1 [hereinafter “GDPR”].

2 See, e.g., Věra Jourová, Eur. Commissioner for Just., Consumers, and Gender, What Next for European and Global Data Privacy?, Address Before the 9th Annual European Data Protection and Privacy Conference (Mar. 20, 2019) (describing the trend in numerous countries toward adopting “an overarching privacy law, with a core set of safeguards and rights, and enforced by an independent supervisory authority,” patterned on the GDPR).

7 European Convention for the Protection of Human Rights and Fundamental Freedoms, Nov. 4, 1950, E.T.S. No. 5 [hereinafter ECHR].

16 Every EU member state has ratified the ICCPR. See U.N. Office of the High Commissioner of Human Rights, Status of Ratification Interactive Dashboard (choose “International Covenant on Civil and Political Rights” from the drop-down menu).

18 The GDPR governs data processing activities by the EU and its member governments in all contexts other than those specifically excluded by Article 2(2).

19 A notable example of this trend is privacy legislation introduced in Washington State earlier this year that was expressly modeled on the GDPR. Washington Privacy Act, H.B. 5376, Reg. Sess. (Wash. 2019). The legislation ultimately failed, however. See Lucas Ropek, Why Did Washington State's Privacy Legislation Collapse?, Gov. Tech. (Apr. 19, 2019). To be sure, the GDPR incentivizes other jurisdictions to adopt similar laws, inasmuch as Article 45 conditions transfers of Europeans’ data to such jurisdictions only if the European Commission has determined that the jurisdictions to provide an “adequate level of protection” for such data.

33 Were it to be adopted by the courts, Jack Balkin's notion that large internet platforms should owe fiduciary duties to their users would be an example of how a hoary common law doctrine could be used to ensure that “information concerning a person's private life … is never used for purposes incompatible with the Covenant,” as General Comment 16 advises. Jack M. Balkin, Information Fiduciaries and the First Amendment, 49 U.C. Davis L. Rev. 1183 (2006).