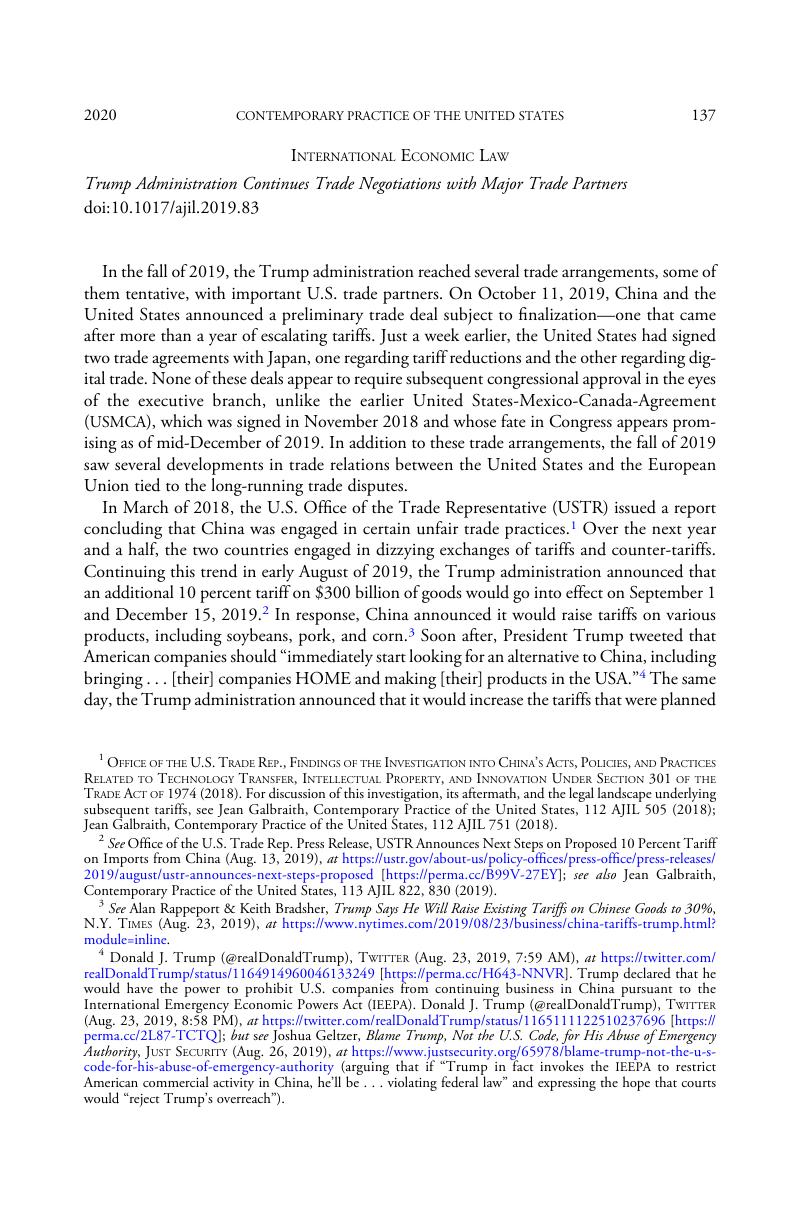 7 Donald J. Trump, Remarks in a Meeting with Vice Premier Liu He of China and an Exchange with Reporters, 2019 Daily Comp. Pres. Doc. No. 713, at 1 (Oct. 11) [hereinafter Trump and Liu Joint Statement]. With respect to enforcement, Trump stated that there would be an enforcement provision and U.S. Trade Representative Robert E. Lighthizer noted that there would be “a very elaborate consultation process.” Id. at 5.

8 See id. at 2, 11 (also quoting Secretary of the Treasury Mnuchin as saying with respect to the U.S. agricultural exports that these would “scale up to an annual figure” of $40 to $50 billion within two years). This would be a large increase compared to current exports. See Office of the U.S. Trade Rep., The People's Republic of China, at https://ustr.gov/countries-regions/china-mongolia-taiwan/peoples-republic-china [https://perma.cc/T956-2TUZ] (“U.S. total exports of agricultural products to China totaled $9.3 billion in 2018.”).

9 Trump and Liu Joint Statement, supra note 7, at 7. The September 1 tariffs had already gone into effect, and the Trump administration made no statement about withdrawing those tariffs. See generally id. (lacking any mention of the September 1 tariffs); 84 Fed. Reg. 57145 (Oct. 24, 2019) (noting the tariffs originally noticed on August 20, 2019 were “effective September 1, 2019”).

12 Id. (observing that the text “still needs to be translated, scrubbed and signed”).

14 See Kevin Breuninger, Trump Says the US Has Come to a Substantial Phase One Deal with China, CNBC (Oct. 11, 2019), at https://www.cnbc.com/2019/10/11/trump-says-us-has-come-to-a-substantial-phase-one-deal-with-china.html (quoting a commentator offering reasoning along these lines).

19 See Donald J. Trump, Message to the Congress on Notification of Initiation of the United States-Japan Trade Agreement, 2019 Daily Comp. Pres. Doc. No. 623, at 1 (Sept. 16) (noting the administration was “pursuing negotiations with Japan in stages” in order to “achieve a comprehensive trade agreement”).

24 See id.; U.S.-Japan Trade Agreement a “Cheap Imitation” of TPP: Sen. Carper, Bloomberg (Sept. 26, 2019), at https://www.bloomberg.com/news/videos/2019-09-26/u-s-japan-trade-agreement-a-cheap-imitation-of-tpp-sen-carper-video (quoting a Democratic senator to the effect that the negotiations had resulted in a “cheap imitation” of the TPP); David Lawder, U.S.-Japan Trade Deal Versus TPP: Where It Falls Short, Where It Exceeds, Reuters (Oct. 7, 2019), at https://www.reuters.com/article/us-usa-trade-japan/u-s-japan-trade-deal-versus-tpp-where-it-falls-short-where-it-exceeds-idUSKBN1WM0A3 (noting various similarities while observing that the TPP provided for broader tariff reduction but less comprehensive commitments with respect to digital trade).

26 Message to the Congress on Notification of Initiation of the United States-Japan Trade Agreement, supra note 19.

28 See Jean Galbraith, International Law and the Domestic Separation of Powers, 99 Va. L. Rev. 987, 1037–42 (2013) (describing how, during the first term of the Obama administration, executive branch officials concluded that congressional approval was not needed for the United States to join the Anti-Counterfeiting Trade Agreement, although this position was disputed by some scholars and members of Congress).

31 See Ana Swanson, Trump Announces a Trade Pact with Japan, N.Y. Times (Sept. 25, 2019), at https://www.nytimes.com/2019/09/25/business/trump-announces-limited-trade-pact-with-japan.html (“[A Japanese chief negotiator, Atsuyuki] Oike added . . . that the two sides would discuss a reduction in the United States’ 2.5 percent tariff on imported passenger cars in their next round of talks.”); Cong. Research Serv., supra note 29, at 2 (listing “Motor Vehicles,” “Services,” and “Currency” as “Potential Provisions in Future Talks”).

32 Cong. Research Serv.,supra note 29, at 2 (noting that while “adherence to Article XXIV has rarely been challenged at the WTO, whether or not the U.S.-Japan deal violates the letter or spirit of this WTO requirement likely depends on the timeline and scope of the next stage talks”).

33 See Protocol Replacing the North American Free Trade Agreement with the Agreement Between the United States of America, the United Mexican States, and Canada, available at https://ustr.gov/sites/default/files/files/agreements/FTA/USMCA/Text/USMCA_Protocol.pdf. For a detailed discussion of the notable differences between NAFTA and USMCA, see Jean Galbraith, Contemporary Practice of the United States, 113 AJIL 150 (2019).

34 On June 19, 2019, Mexico overwhelmingly approved the USMCA. See LXIV Legislatura: Periodo Extraordinario Primer Año de Ejercicio, Senado de la República, at http://www.senado.gob.mx/64/votacion/3417 [https://perma.cc/V8J9-K8PY] (showing a Senate vote of 114 to 4 in favor of the trade agreement). Although the Canadian Parliament began its process in May, it was dissolved prior to completing this process and, as a result, its implementation act must be reintroduced in the next parliamentary session.

43 See Statement on the Publication of the WTO's Award in the Airbus Dispute, supra note 42 (stating that “[o]ur readiness to find a fair settlement remains unchanged”); David J. Lynch, U.S. Can Impose Tariffs on $7.5 Billion in Goods Because E.U. Gave Illegal Subsidies to Airbus, WTO Rules, Wash. Post (Oct. 2, 2019), at https://www.washingtonpost.com/business/economy/the-united-states-can-impose-tariffs-on-75-billion-in-goods-because-european-union-gave-illegal-subsidies-to-airbus-wto-rules/2019/10/02/021edc06-e51d-11e9-b403-f738899982d2_story.html (quoting a senior USTR official as saying the EU proposals were “not sufficient”).