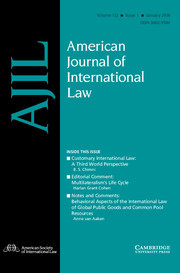 Use of Force, Arms Control, and Nonproliferation

Recent Books on International Law: Edited by Richard B. Bilder