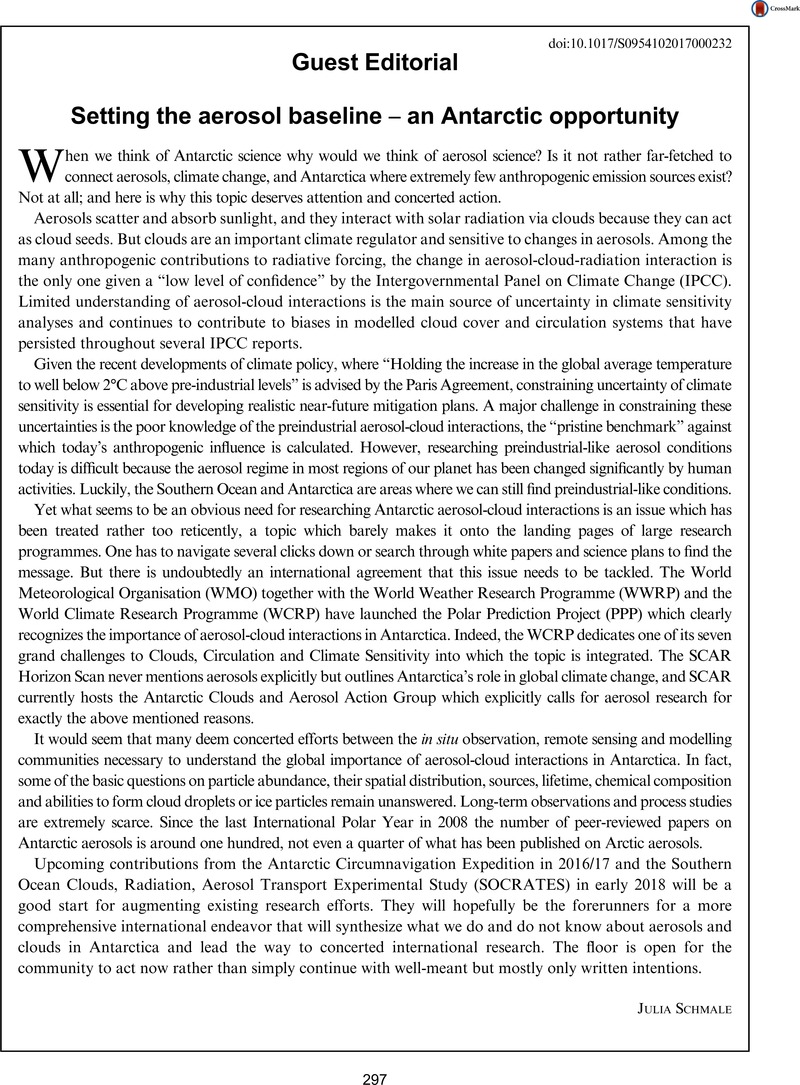 When we think of Antarctic science why would we think of aerosol science? Is it not rather far-fetched to connect aerosols, climate change, and Antarctica where extremely few anthropogenic emission sources exist? Not at all; and here is why this topic deserves attention and concerted action.

Aerosols scatter and absorb sunlight, and they interact with solar radiation via clouds because they can act as cloud seeds. But clouds are an important climate regulator and sensitive to changes in aerosols. Among the many anthropogenic contributions to radiative forcing, the change in aerosol-cloud-radiation interaction is the only one given a “low level of confidence” by the Intergovernmental Panel on Climate Change (IPCC). Limited understanding of aerosol-cloud interactions is the main source of uncertainty in climate sensitivity analyses and continues to contribute to biases in modelled cloud cover and circulation systems that have persisted throughout several IPCC reports.

Given the recent developments of climate policy, where “Holding the increase in the global average temperature to well below 2°C above pre-industrial levels” is advised by the Paris Agreement, constraining uncertainty of climate sensitivity is essential for developing realistic near-future mitigation plans. A major challenge in constraining these uncertainties is the poor knowledge of the preindustrial aerosol-cloud interactions, the “pristine benchmark” against which today’s anthropogenic influence is calculated. However, researching preindustrial-like aerosol conditions today is difficult because the aerosol regime in most regions of our planet has been changed significantly by human activities. Luckily, the Southern Ocean and Antarctica are areas where we can still find preindustrial-like conditions.

Yet what seems to be an obvious need for researching Antarctic aerosol-cloud interactions is an issue which has been treated rather too reticently, a topic which barely makes it onto the landing pages of large research programmes. One has to navigate several clicks down or search through white papers and science plans to find the message. But there is undoubtedly an international agreement that this issue needs to be tackled. The World Meteorological Organisation (WMO) together with the World Weather Research Programme (WWRP) and the World Climate Research Programme (WCRP) have launched the Polar Prediction Project (PPP) which clearly recognizes the importance of aerosol-cloud interactions in Antarctica. Indeed, the WCRP dedicates one of its seven grand challenges to Clouds, Circulation and Climate Sensitivity into which the topic is integrated. The SCAR Horizon Scan never mentions aerosols explicitly but outlines Antarctica’s role in global climate change, and SCAR currently hosts the Antarctic Clouds and Aerosol Action Group which explicitly calls for aerosol research for exactly the above mentioned reasons.

It would seem that many deem concerted efforts between the in situ observation, remote sensing and modelling communities necessary to understand the global importance of aerosol-cloud interactions in Antarctica. In fact, some of the basic questions on particle abundance, their spatial distribution, sources, lifetime, chemical composition and abilities to form cloud droplets or ice particles remain unanswered. Long-term observations and process studies are extremely scarce. Since the last International Polar Year in 2008 the number of peer-reviewed papers on Antarctic aerosols is around one hundred, not even a quarter of what has been published on Arctic aerosols.

Upcoming contributions from the Antarctic Circumnavigation Expedition in 2016/17 and the Southern Ocean Clouds, Radiation, Aerosol Transport Experimental Study (SOCRATES) in early 2018 will be a good start for augmenting existing research efforts. They will hopefully be the forerunners for a more comprehensive international endeavor that will synthesize what we do and do not know about aerosols and clouds in Antarctica and lead the way to concerted international research. The floor is open for the community to act now rather than simply continue with well-meant but mostly only written intentions.