Special Issue: The Construction and Governance of Randomised Controlled Trials 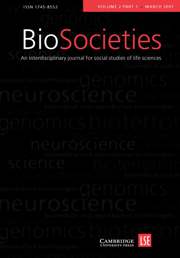