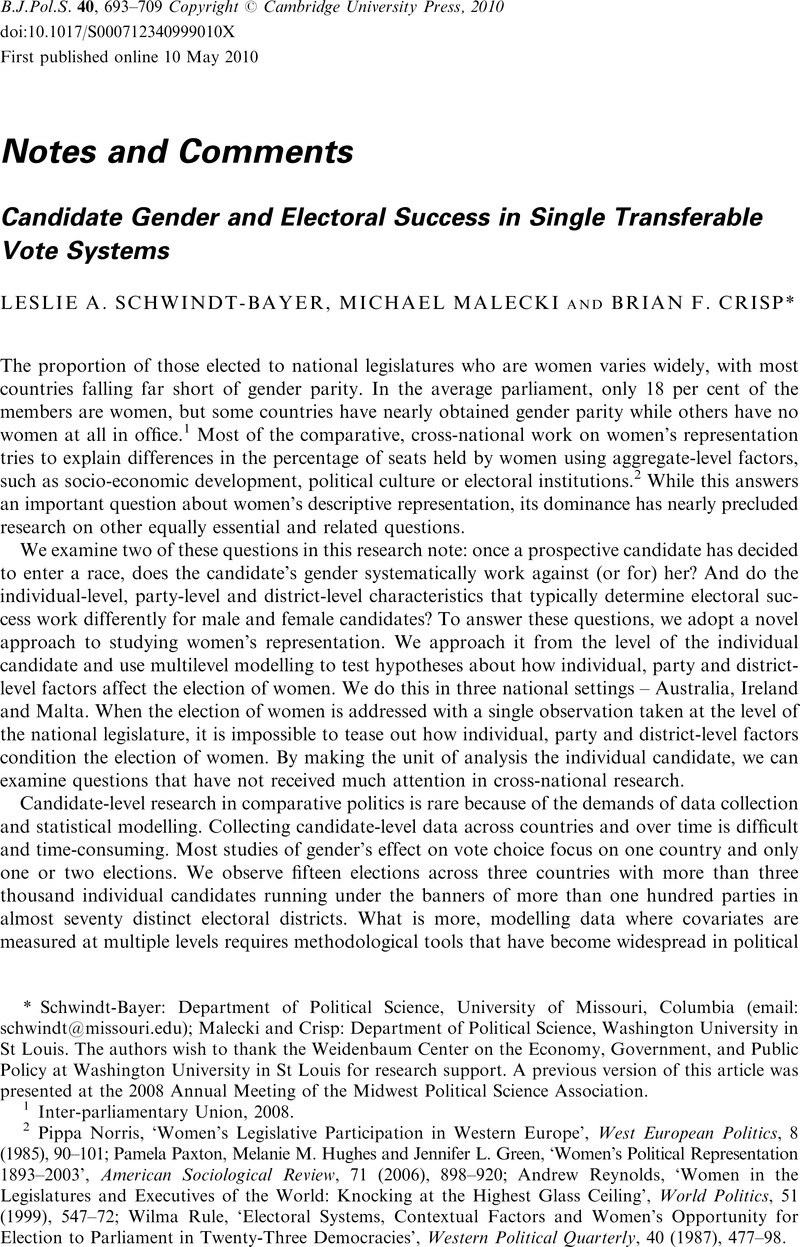 3 Parties typically run candidates in many, if not all, districts, but their fortunes often vary across them, with some districts being traditional strongholds, for example. We can think of parties’ performance as national averages, but we are interested in whether variations in performance across districts help explain the election of women. For example, are female candidates doomed by being fielded only in districts where the party does poorly? Thus, we account for each party’s history in each district by including a level in our models that captures this district-specific history of each party. We refer to this level as ‘party-in-a-district’.

5 Rydon, Joan, ‘Representation of Women and Ethnic Minorities in the Parliaments of Australia and New Zealand’, in Rule and Zimmerman, eds, Electoral Systems in Comparative Perspective, pp. 223–234.

21 Lane, , ‘The Election of Women under Proportional Representation’.

23 Darcy, Robert and Choike, James R., ‘A Formal Analysis of Legislative Turnover: Women Candidates and Legislative Representation’, American Journal of Political Science, 30 (1986), 237–255. In the context of the United States, Palmer and Simon find that while female incumbents win at the same rate as male candidates, they face a more competitive environment and tend to encourage female challengers to emerge.

32 First-count, first-rank vote share is the percentage of first preference votes a candidate receives prior to any vote transfers from additional vote counts. Ideally, these data would be analysed with estimators developed to account for the fact that vote shares of any one candidate are a function of the vote shares of all other candidates, but to our knowledge, those tools have not been extended to capture multilevel data structures (Honaker, James, King, Gary and Katz, Jonathan N., ‘A Fast, Easy, and Efficient Estimator for Multiparty Electoral Data’, Political Analysis, 10 (2002), 84–100).

33 A fourth level is time or election. We include a time counter in our models because we suspect that there might be a trend towards more progressive thinking about the election of women and because we think that factors associated with specific electoral context could influence the results. However, as the models in Appendix Table A1 illustrate, specific electoral context is never decisively different from zero. Our observations are also nested within countries. Although we expect some effects (incumbency) to operate similarly across cases, we model countries separately to show how gender affects election outcomes in each country.

36 We estimate the models using the lme4 package in R, which fits a restricted maximum-likelihood (REML) model. We then simulate the parameters of these fitted models via Markov Chain Monte Carlo (MCMC) empirical Bayes methods to incorporate appropriate model uncertainty. Finally, we compare multilevel coefficient estimates to those from a completely pooled model fit by MCMC with comparably weak priors. The lme4 method estimates a higher-level coefficient via a restricted variance-covariance matrix at each level. By contrast, a fully Bayesian approach would model the varying coefficients directly.

37 The data for candidate gender in Malta were from former University at Buffalo Professor John C. Lane’s website of Malta data, www.maltadata.com. For Ireland and Australia, no dataset of candidate gender was available, and we coded the gender of candidates ourselves. In many cases, candidate gender was clear from the candidate’s name, however, in other cases, the names were ambiguous as to gender. For these individuals, we conducted internet searches on the candidates, consulted political scholars and staff in relevant government offices in Ireland and Australia, and cross-checked the final coding against official government publications that reported the number of female candidates running in each election.

38 We considered controlling for party ideology but could not find any measures of party orientation that covered all of the parties in our dataset. Rather than lose cases, we report models that do not include a control for party ideology. We did run the reduced-n models, however, to determine whether ignoring party ideology biases our conclusions. Using data from the Australian Election Study and the Eurobarometer, we created a variable that measures a party’s mean ideology by calculating the mean self-placement scores for all respondents who say they would vote for a particular party. The results showed that no statistically discernible effect for candidate gender interacted with party orientation. Models are available from the authors upon request.

39 We had hoped to control for variations in religiosity across districts, but finding comparable data for every district in each of the three countries across five elections proved impossible. Rather than drop cases, we do not include an explicit consideration of religion in the models. We did run reduced-n models based on survey data from the Eurobarometer and Australian Election Study (no district-level data were available for Malta), and these models do not support the hypothesis that women’s electoral success is limited by religious affiliation. The estimated impact of Catholicism in both countries is substantively small and not statistically discernible from zero. Models are available from the authors upon request.

40 Candidates who competed successfully in the previous election are coded as incumbents.

41 Kelley, and McAllister, , ‘Ballot Paper Cues and the Vote in Australia and Britain: Alphabetical Voting, Sex, and Title’.

42 Kelley, and McAllister, , ‘Ballot Paper Cues and the Vote in Australia and Britain’.

45 Detailed results from the pooled models are available from the authors upon request. We omitted them from Appendix Table A1 for reasons of space.

46 Indicators of model fit, specifically the Bayesian Information Criterion (BIC) and the Deviance Information Criterion (DIC), favour the multilevel models. The BIC and DIC are proportional to the marginal likelihood of the model, and account differently for the number of effective parameters – some value between the number of covariates k, and k times the number of units. Further, in a few cases, the pooled models either overstate or understate the effect of covariates measured at the higher (not individual) levels. The estimation of intercepts for the higher-level units of observation (parties-in-districts and districts) did not account for a tremendous amount of unmodelled variation, but they often had non-zero variance.

47 Lane, , ‘The Election of Women under Proportional Representation’.

48 The proportion of incumbents defending contested seats occasionally exceeds 1 in Ireland, as individual candidates can compete in multiple districts.

49 The proportion of incumbents defending contested seats frequently exceeds 1 in Malta, as individual candidates can and do compete in multiple districts.