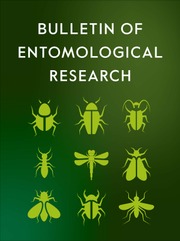 ♀ ♂. Black; head (including palpi), all legs (including the coxae, but excluding the feet which are strongly darkened), tegulae, and certain portions of the basal joint of the scape, pale red testaceous; the lateral membranous portions of the 1st and 2nd tergites, and the basal ventrites, very pale red testaceous; the plate of the 1st tergite only weakly coloured, and of the 2nd not much more strongly so, both probably more rightly describable as pale red testaceous also; 3rd tergite (except laterally and right across apex) also weakly coloured; the flagellum, and certain portions of the scape, brown; wing-veins and stigma brown, and the setae of the wings coloured; apical third of stigma commonly appearing to be to some extent hyaline.